Arisaig (Scottish Gaelic: Àrasaig) is a village in Lochaber, Inverness-shire, located 7 miles (11 km) south of Mallaig on the west coast of the Scottish Highlands, within the Rough Bounds. It is also the traditional name for part of the surrounding peninsula south of Loch Morar, extending as far east as Moidart. Etymologically, Arisaig means "the safe bay". It lies in the Scottish council area of Highland and has a population of about 300. 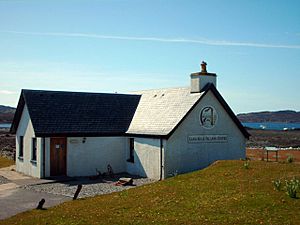 The Land, Sea and Island Centre

Arisaig has a post office, general store, restaurant, cafe, hotel with bar, and marina. Tourism is the main industry in the area.

The Land, Sea and Islands Centre holds a display on the connection between the SOE and Arisaig,. See above.

Arisaig lies on the A830 to Mallaig to the north and Fort William to the east. It is also known as the Road to the Isles. Work on widening it into a double-lane road was completed in 2008. The village is also connected to Mallaig and Fort William by the West Highland Line. Arisaig railway station is the most westerly on the British mainland.

All content from Kiddle encyclopedia articles (including the article images and facts) can be freely used under Attribution-ShareAlike license, unless stated otherwise. Cite this article:
Arisaig Facts for Kids. Kiddle Encyclopedia.