Highland (Scottish Gaelic: A' Ghàidhealtachd;) is a council area in the Scottish Highlands and is the largest local government area in the United Kingdom. It shares borders with the council areas of Aberdeenshire, Argyll and Bute, Moray and Perth and Kinross. Their councils, and those of Angus and Stirling, also have areas of the Scottish Highlands within their administrative boundaries. The Highland area covers most of the mainland and inner-Hebridean parts of the historic counties of Inverness-shire and Ross and Cromarty, all of Caithness, Nairnshire and Sutherland and small parts of Argyll and Moray.

According to the 2011 UK census, there are nearly 12,000 Scottish Gaelic speakers in the Highland area. 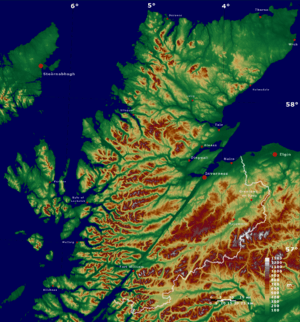 In 1975, the area was created as a two-tier region, under the Local Government (Scotland) Act 1973, with an elected council for the whole region and, in addition, elected councils for each of eight districts, Badenoch and Strathspey, Caithness, Inverness, Lochaber, Nairn, Ross and Cromarty, Skye and Lochalsh and Sutherland. The act also abolished county and burgh councils.

In 1996, under the Local Government etc. (Scotland) Act 1994, the Highland Regional Council and the district councils were wound up and their functions were transferred to a new Highland Council. The Highland Council adopted the districts as management areas and created area committees to represent them. However, the boundaries of committee areas ceased to be aligned exactly with those of management areas as a result of changes to ward boundaries in 1999. Ward boundaries changed again in 2007, and the management areas and related committees have now been abolished in favour of three new corporate management areas: Caithness, Sutherland and Easter Ross; Inverness, Nairn and Badenoch and Strathspey; and Ross, Skye and Lochaber. The names of these areas are also names of constituencies, but boundaries are different.

To many people within the area, using the name Highland as a noun sounds wrong. Dingwall in Highland, for example, sounds strange and is not idiomatic usage. To refer specifically to the area covered by the council, people tend to say the Highland Council area or the Highland area or the Highland region. Otherwise, they tend to use the traditional county names, such as Ross-shire. Highlands sometimes refers to the Highland council area. More usually it refers to a somewhat larger or overlapping area.

The Highland Council headquarters is located in Inverness with most previous district council offices retained as outstations.

Highland Council covers an area of [convert: needs a number] — which is 11.4% of the total size of Great Britain and is 20% larger than Wales. The Highland and Islands division of Police Scotland also includes the Western Isles, Orkney and Shetland (formerly Northern Constabulary) and therefore covers an area of 30,659 square kilometres (11,838 sq mi), which is larger than that of the state of Belgium.

Highland Council's highest point is Ben Nevis, the tallest mountain in both Scotland and the United Kingdom as a whole. Its northernmost point is Stroma, a small island in the Pentland Firth. Its southernmost point is on the Morvern peninsula. Highland contains the westernmost point of the island of Great Britain, at Corrachadh Mòr. Despite the name, not all of Highland is mountainous. The areas east of Inverness, as well as the Black Isle, eastern Sutherland, and all of Caithness are, in fact, low-lying.

Towns and villages in the Highland Council Area

All content from Kiddle encyclopedia articles (including the article images and facts) can be freely used under Attribution-ShareAlike license, unless stated otherwise. Cite this article:
Highland (council area) Facts for Kids. Kiddle Encyclopedia.