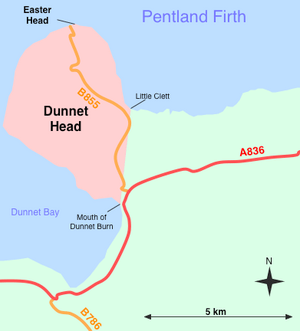 "Most northerly point of mainland Britain."

Dunnet Head (Scottish Gaelic: Ceann Dùnaid) is a peninsula in Caithness, on the north coast of Scotland. Dunnet Head includes the most northerly point of both mainland Scotland and the island of Great Britain.

The point, also known as Easter Head, is at grid reference , about 18 km (11 mi) west-northwest of John o' Groats and about 20 km (12 mi) from Duncansby Head. Dunnet Head can be seen also as the western limit of the Pentland Firth on the firth's southern, or Caithness, side (Duncansby Head is the eastern limit). Although Easter Head is the most northerly point on the Scottish mainland, the northernmost point of Scotland lies in the Shetland islands, approximately 170 miles (270 km) further north. 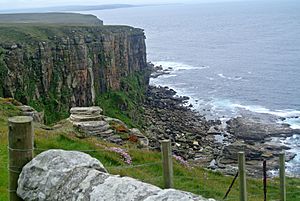 The headland's boundary with the rest of the Scottish mainland can be defined as a north-south line running from Little Clett to the mouth of Dunnet Burn in Dunnet Bay. This line is followed along most of its route by a single track road, the B855, which links Brough with the village of Dunnet, making this the most northerly road on mainland Britain. From this line, the headland projects westward and northward into the Atlantic Ocean and the Pentland Firth and shelters the more southerly waters of Dunnet Bay.

The peninsula is north-east of the burgh of Thurso, and on a clear day, it affords views of the islands of Stroma to the east, and Hoy and the Orkney Mainland, 15 km (9 miles) away to the north, across the Pentland Firth.

Dunnet Head lochs are restocked every two years with brown trout fry; fishing by permit is between 1 April and early October.

Dunnet Head has a viewing platform where visitors can watch birds in the neighbouring cliffs. Depending on the season, birds may include fulmars, guillemots, kittiwakes, puffins, great skuas, arctic skuas, razorbills, and - at sea - gannets and herring gulls.

Dunnet Head was the central meridian of the 6-inch (150-millimetre) and 1:2500 Ordnance Survey maps of Caithness.

All content from Kiddle encyclopedia articles (including the article images and facts) can be freely used under Attribution-ShareAlike license, unless stated otherwise. Cite this article:
Dunnet Head Facts for Kids. Kiddle Encyclopedia.