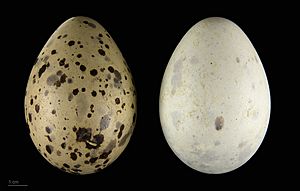 The herring gull (Larus argentatus or European herring gull) is a large gull (up to 26 inches or 66 cm long). It is the most abundant and best known of all gulls along the shores of western Europe. It breeds across Northern Europe, Western Europe, Scandinavia and the Baltic states.

Some herring gulls, especially those resident in colder areas, migrate further south in winter, but many are permanent residents, e.g. in the British Isles, Iceland, or on the North Sea shores. European herring gulls are also abundant around inland garbage dumps, and some have even adapted to life in inland cities.

The taxonomy of the herring gull / lesser black-backed gull group is very complicated, with different authorities recognising between two and eight species.

This group has a ring distribution around the northern hemisphere. Differences between adjacent forms in this ring are fairly small, but by the time the circuit is completed, the end members, herring gull and lesser black-backed gull, are clearly different species.

All content from Kiddle encyclopedia articles (including the article images and facts) can be freely used under Attribution-ShareAlike license, unless stated otherwise. Cite this article:
Herring gull Facts for Kids. Kiddle Encyclopedia.