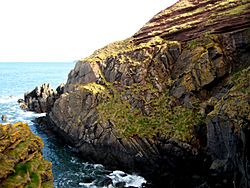 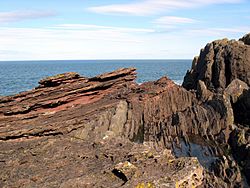 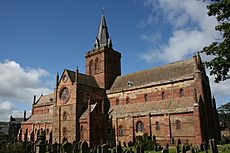 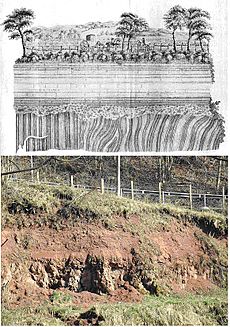 The unconformity at Jedburgh: illustrated by John Clerk in 1787 with a recent photography by Keith Montgomery

The Old Red Sandstone is a dark red sandstone laid down mainly in the Devonian period over a large part of the continent of Laurussia. The base of the ORS is now known to be in the Silurian and the top in the Carboniferous.

Laurussia is often called the Old Red Continent, or Euramerica. It included what is now much of northern Europe, Greenland and North America. It was, at the time, between 0o and 30o south of the equator.

The Old Red Sandstone (ORS) was first discovered in Great Britain, and it played a big part in early geology. The term 'Old Red Sandstone' was first used in 1821 by Scottish naturalist and mineralogist Robert Jameson.

In 1787 James Hutton saw what is now known as Hutton's Unconformity at Jedburgh in the Scottish Borders.

Later, on the Berwickshire coast, he found Siccar Point. There was "a beautiful picture of this junction washed bare by the sea", where 345 million year old Devonian Old Red Sandstone overlies 425 million year old Silurian greywacke.

The sequence of events

The unconformity represents a gap in the record of geological time. During this time the rocks were raised above sea level, and erosion took place. Folding and faulting occurred. The mountains were formed when a section of northwestern Europe collided with a continental plate made up of parts of present-day North America and Greenland. The lower strata tilted almost vertical.

The ORS rocks were deposited in a series of low-lying terrestrial basins, with lakes and rivers. These basins were between ranges of the Caledonian mountains. The ORS was laid down in this non-marine terrestrial environment. Thick deposits of sand and mud, 11,000 metres (36,000 feet) deep, often stained red by oxidized iron minerals, collected as the basins sank down.

The ORS was laid down over a long period of time from the latest Silurian to the earliest Carboniferous (Mississippian), 418–355 million years ago.

The ORS is a rock formation which varies from place to place as the circumstances at the time must have varied.

The dark red colour of these rocks comes from iron oxide. However, not all the Old Red Sandstone is red or sandstone — the sequence also includes conglomerates, mudstones, siltstones and thin limestones and colours can range from grey and green through red to purple.

These deposits got sediment from the erosion of the Caledonian Mountain chain. This was built by the collision of the former continents to make the Old Red Sandstone Continent. This sequence is known as the Caledonian orogeny.

All content from Kiddle encyclopedia articles (including the article images and facts) can be freely used under Attribution-ShareAlike license, unless stated otherwise. Cite this article:
Old Red Sandstone Facts for Kids. Kiddle Encyclopedia.