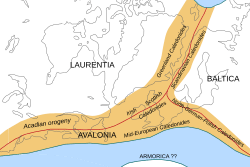 Laurussia, red lines mark the border of the 3 landmasses that make up Laurussia

Laurussia was a minor supercontinent which formed in the Devonian period. It is often called the Old Red Sandstone Continent or Euramerica.

Laurussia included much of what is now northern Europe, Greenland and North America.

All content from Kiddle encyclopedia articles (including the article images and facts) can be freely used under Attribution-ShareAlike license, unless stated otherwise. Cite this article:
Laurussia Facts for Kids. Kiddle Encyclopedia.