Jedburgh ( Scottish Gaelic: Deadard; Scots: Jeddart or Jethart) is a town and former royal burgh in the Scottish Borders and the traditional county town of the historic county of Roxburghshire, the name of which was randomly chosen for Operation Jedburgh in support of the D-Day invasion.

Jedburgh lies on the Jed Water, a tributary of the River Teviot. It is 10 miles (16 km) from the border with England, and is dominated by the substantial ruins of Jedburgh Abbey. Other notable buildings in the town include Mary, Queen of Scots' House, Jedburgh Castle Jail, now a museum, and the Carnegie library. 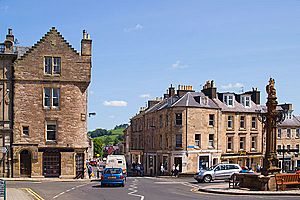 Bishop Ecgred of Lindisfarne founded a church at Jedburgh in the 9th century, and King David I of Scotland made it a priory between 1118 and 1138, housing Augustinian monks from Beauvais in France. The abbey was founded in 1147, but border wars with England in the 16th century left it a ruin.

The deeply religious Scottish king Malcolm IV died at Jedburgh in 1165, aged 24. His death is thought to have been caused by excessive fasting.

David I built a castle at Jedburgh, and in 1174, it was one of five fortresses ceded to England. It was an occasional royal residence for the Scots, but captured by the English so often that it was eventually demolished in 1409, by which time it was the last English stronghold in Scotland. 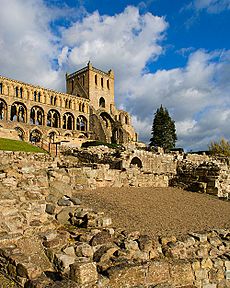 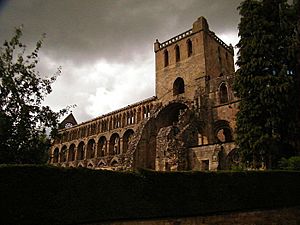 Jedburgh Abbey on a cloudy day

In 1258, Jedburgh was a focus of royal attention, with negotiations between Scotland's Alexander III and England's Henry III over the succession to the Scottish throne, leaving the Comyn faction dominant. Alexander III was married in the abbey in 1285.

Its proximity to England made it subject to raids and skirmishes by both Scottish and English forces but its strategic position also brought the town valuable trade. At various times and at various locations the town supported a horse market, a cattle market, a corn market and a butcher market. Farm workers and servants also attended hiring fairs seeking employment.

Mary, Queen of Scots, stayed at a certain house in the town in 1566 and that house is now a museum.

Lord of Jedburgh Forest was a Lordship of Parliament that was granted to George Douglas, 1st Earl of Angus on his marriage to the Princess Mary, daughter of Robert III in 1397. It is a subsidiary title of the present Earl of Angus, the Duke of Hamilton. The Duke of Douglas was raised to the position of Viscount Jedburgh Forest, but he died without an heir in 1761.

In 1745, the Jacobite army led by Prince Charles Edward Stuart passed through the town on its way to England, and the Prince also stayed there. The Castle Prison opened in 1823.

In 1787, the geologist James Hutton noted what is now known as the Hutton Unconformity at Inchbonny, near Jedburgh. Layers of sedimentary rock which are tilted almost vertically are covered by newer horizontal layers of red sandstone. This was one of the findings that led him to develop his concept of an immensely long geologic time scale with "no vestige of a beginning, no prospect of an end."

The expression "Jeddart justice" or "Jethart Justice", in which a man was hanged first, and tried afterward (compare Lynch law), seems to have arisen from one case of summary execution of a gang of villains. 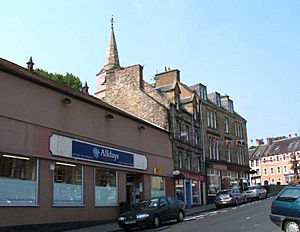 The ruined abbey was the site of a major archaeological dig in 1984. It is maintained by Historic Scotland and open to the public (there is an entry fee). Many of the more important finds from the excavation are displayed on site in the modern visitor centre attached to the Abbey ruins. The Abbey, though much damaged over the years, especially by invasions from England, is still one of the finest late Norman buildings remaining in Scotland. Now roofless, part of the church was used as the parish church into the 19th century. Jedburgh Castle Jail, built in the early 19th century on the site of the medieval castle, is also open to the public. Borders traditions like the annual Callant's Festival and bands of pipes and drums add local colour, and delicacies include Jethart Snails and Jethart Pears. Another annual event is the Jethart Hand Ba' game. The Canongate Brig dates from the 16th century, and there are some fine riverside walks. The Capon Oak Tree is reputed to be 2000 years old, and Newgate Prison and the town spire are among the town's older buildings. The town's industries included textiles, tanning and glove-making, grain mills, and electrical engineering. Central to the festival and customs associated with the town of Jedburgh are the Jedforest Instrumental Band who support many civic, religious and social events throughout the year, a service provided consistently since 1854.

Free Wi-Fi has been provided around the town since the summer of 2008.

Although Jedburgh no longer has any rail access it is well located on the road network. The A68 provides direct access to Edinburgh (48 miles (77 km)) and Newcastle-upon-Tyne (58 miles (93 km)). Carlisle is 57 miles (92 km) away and Hawick, Kelso, Selkirk and Galashiels are all within 20 miles (30 km).

Jedburgh is known to motorists from the Edinburgh and Newcastle-upon-Tyne areas as Jedburgh is signposted as a primary destination on the A68.

Bus services to Jedburgh are provided by Borders Buses. Until July 2013 they were mostly run by local operator Munro's of Jedburgh.

The town is home to a Rugby Club, Jed-Forest which was founded in 1885 Under-18 "Semi Junior" rugby is played by Jed Thistle at Lothian Park. Also football is represented by Jed Legion FC which currently plays in 'A' League of the Border Amateur League. They play their home matches at Woodend. Ancrum AFC play in the village of Ancrum just to the north at Bridgend Park and include many players from Jedburgh and are in the Border Amateur 'C' League. A Bowling Club is located at Allars Mill. Cricket was once also played at Woodend but the club disbanded in the late 80s.

Jedburgh has a golf club dating from 1892, the course has 18 holes. 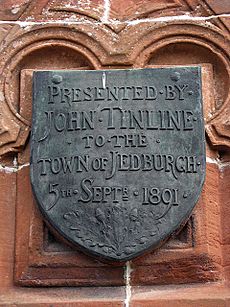 Several notable people were born in the town, including Reverend Doctor Thomas Somerville's niece, Mary Somerville in 1780 (the eminent scientist and writer, after whom Somerville College, Oxford is named, and who appeared on the Royal Bank of Scotland £10 note from 2017).

James Thomson (1700–1748) who wrote "Rule Britannia", was born in Ednam, a village only twelve miles away, but he was educated in Jedburgh. David Brewster, physicist, mathematician, scientist, writer and inventor of the kaleidoscope, was born in Jedburgh in 1781. The popular preacher Rev. Robert Aitken (1800–1873) was born in Crailing near Jedburgh. General Sir Bindon Blood was born nearby in 1842. Alexander Jeffrey (F.S.A. Scot.) was a solicitor in the town and was also the county historian. He died in Jedburgh in 1874. The author and broadcaster Lavinia Derwent was born in a farmhouse a few miles outside Jedburgh in 1909. The Tinline brothers emigrated from Jedburgh in the late 1830s. George Tinline made a career in banking in Australia. John Tinline went to New Zealand and made his wealth in farming. John returned to Jedburgh later in life and gifted Allerley Well Park to his hometown.

Emmy Award-winning journalist Nick Watt is from Jedburgh and hosted a short film about the town for the Travel Channel.

All content from Kiddle encyclopedia articles (including the article images and facts) can be freely used under Attribution-ShareAlike license, unless stated otherwise. Cite this article:
Jedburgh Facts for Kids. Kiddle Encyclopedia.