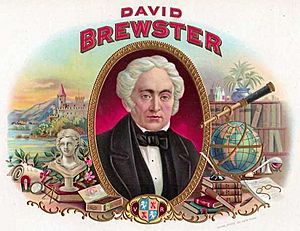 Inner picture of a cigar box from the early 1900s with a portrait of Brewster.

David Brewster was born at the Canongate in Jedburgh, Roxburghshire, to Margaret Key (1753–1790) and James Brewster (c. 1735–1815), the rector of Jedburgh Grammar School and a teacher of high reputation.

At the age of 12, David was sent to the University of Edinburgh (graduating MA in 1800), with the intention of being a minister. He was licensed a minister of the Church of Scotland, and preached around Edinburgh on several occasions.

He had already shown a strong inclination for natural science. 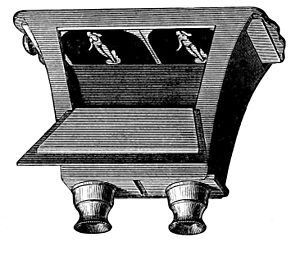 In science he is principally remembered for his experimental work in physical optics, mostly concerned with the study of the polarization of light and including the discovery of Brewster's angle.

A pioneer in photography, Brewster invented an improved stereoscope, which he called "lenticular stereoscope" and which became the first portable 3D-viewing device. He also invented the binocular camera, two types of polarimeters, the polyzonal lens and the lighthouse illuminator. 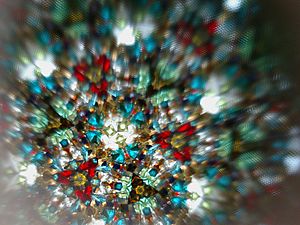 The view in a kaleidoscope

Among the non-scientific public, his fame spread more effectually by his invention in about 1815 of the kaleidoscope, for which there was a great demand in both the United Kingdom, France, and the United States.

As a historian of science, Brewster focused on the life and work of his hero, Isaac Newton. Brewster published a detailed biography of Newton in 1831 and later became the first scientific historian to examine many of the papers in Newton's Nachlass. 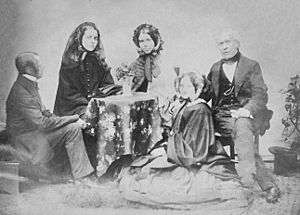 Brewster married a second time in Nice, on 26 (or 27) March 1857, to Jane Kirk Purnell (b. 1827), the second daughter of Thomas Purnell of Scarborough. Lady Brewster famously fainted at the Oxford evolution debate of 30 June 1860.

Brewster died in 1868, and was buried at Melrose Abbey, next to his first wife and second son. The physics building at Heriot-Watt University is named in his honour.

All content from Kiddle encyclopedia articles (including the article images and facts) can be freely used under Attribution-ShareAlike license, unless stated otherwise. Cite this article:
David Brewster Facts for Kids. Kiddle Encyclopedia.