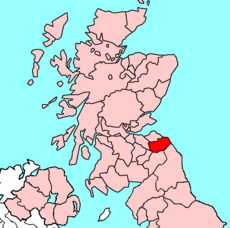 Berwickshire is a British county in Scotland. It is also the name of a committee area of the Scottish Borders Council. Berwickshire is on the boundary of Scotland with England. It is named after Berwick-upon-Tweed, but Scotland lost Berwick to England in 1482.

Berwickshire's first county town was the Royal Burgh of Berwick-upon-Tweed. In 1482 England seized Berwick. After that the shire's business was done at Duns or Lauder until Greenlaw became the county town in 1596.

A Sheriff Court sits in Duns.

Berwickshire is now all in the Scottish Borders Council Area. 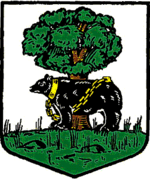 The shield shows a bear chained to a wych-elm tree. The bear and wych-elm are part of Berwick upon Tweed’s shield because they sound like the town’s name.

On 12 November 1975 the Lord Lyon gave the arms again to Berwickshire District Council. When the district council ended in 1996, the right to the arms went back to the Queen.

Berwickshire’s name is still used locally. The Berwickshire News is a newspaper in the county and many groups keep "Berwickshire" in their titles.

Places in Berwickshire include:

All content from Kiddle encyclopedia articles (including the article images and facts) can be freely used under Attribution-ShareAlike license, unless stated otherwise. Cite this article:
Berwickshire Facts for Kids. Kiddle Encyclopedia.