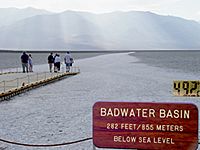 A geological basin is a large low-lying area. It is often below sea level.

Geological basins are one of the two most common places inland which collect sediment (the other is lakes). The type of rocks which form there tell about the palaeoclimate of the continent. The geology is of interest to oil prospectors, hydrologists and palaeontologists. 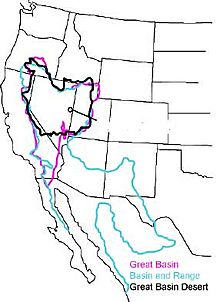 Full extent of the Basin and Range. (NPS image)

The deep Death Valley basin is filled with sediment (light yellow) eroded from the surrounding mountains. Black lines show some of the major faults that created the valley. (USGS image)

Starting around 16 million years ago in the Miocene, and continuing into the present, a large part of the North American Plate has been stretched by being pulled apart.p611 The result has been the creation of a large and still-growing region of relatively thin crust; the region grew an average of 1 inch (2.5 cm) per year initially and then slowed to 0.3 inches (0.76 cm) per year in the last 5 million years. Geologists call this region the Basin and Range Province.

Pulling forces causes rock at depth to stretch like silly putty and rock closer to the surface to break along normal faults into downfallen basins called grabens.

Because the basin is low-lying, it collects sediment. Rivers may run down into the basin from surrounding mountains. Floods or lakes may form with no outlet to the sea. Evaporation occurs; more sediment arrives, and so on. The strata which forms gives clues as to the palaeoclimate.

Some basins, such as the Great Basin, do not drain to the sea. The water may drain into underground aquifers, or evaporate to form salt lakes.

Most basins, however, are drainage basins with rivers bringing their water into the sea. Many such rivers meander through a web of islands at the river delta, and bring along a huge amount of sediment in the form of mud, clay and sand. The Amazon and the Mississippi river systems are like this. The strata which form are quite different from inland basin lakes.en:drainage basin

All content from Kiddle encyclopedia articles (including the article images and facts) can be freely used under Attribution-ShareAlike license, unless stated otherwise. Cite this article:
Basin (geology) Facts for Kids. Kiddle Encyclopedia.