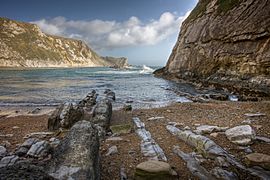 Man o' War Bay on the Dorset coast (Jurassic Coast). The strata here are nearly vertical, as a result of ancient orogeny. 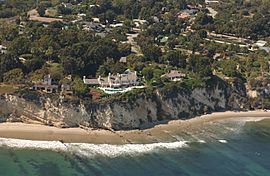 Strata are layers of rock, or sometimes soil. In nature, strata come in many layers. It is a term in sedimentary and historical geology; the singular is stratum. The study of strata is called stratigraphy.

These layers are laid down as sediment, often in the sea, and are slowly changed by pressure, heat and chemical action into rocks.

The strata are often typical of a particular time and place, and allow geologists to relate rocks in different places. For instance, chalk was laid down in the Upper Cretaceous period, and consists mainly of the remains of microscopic algae called coccoliths.

In normal strata, the later strata are laid down on earlier strata in horizontal layers. In the long passage of time, sedimentary rocks may get deformed by huge forces in the Earth: volcanism, orogeny (mountain building) or other causes. Then it requires research to work out what has happened to the strata.

When strata rise above sea level they get worn down by erosion, such as weather. This causes gaps in the sequence of strata, which may have risen and sunk many times in Earth history. These gaps are called unconformities in geological jargon.

In many formations of strata there are repeating patterns. For example, clay layers alternate with sandstone layers; or carbonate layers alternate with shales. This is usually caused by repeating cycles of climate. In warmer times the sea rises, and carbonate rocks are deposited in shallow subtropical seas. Later, ice builds up at the poles and the sea level drops. Then the same area is close to shore, and gets sand and mud washed down by rivers.

All content from Kiddle encyclopedia articles (including the article images and facts) can be freely used under Attribution-ShareAlike license, unless stated otherwise. Cite this article:
Strata Facts for Kids. Kiddle Encyclopedia.