Kids Encyclopedia Facts
This page is about the Mexican city. For the Bolivian seat of government, see La Paz.

La Paz (, Peace) is the capital city of the Mexican state of Baja California Sur and an important regional commercial center. The city had a 2010 census population of 215,178 people, but its metropolitan population is somewhat larger because of surrounding towns such as el Centenario, el Zacatal and San Pedro. Its surrounding municipality, which is the fourth-largest municipality in Mexico in geographical size, reported a population of 251,871 persons living on a land area of 20,275 km2 (7,828 sq mi).

La Paz was first inhabited by Neolithic hunter-gatherers at least 10,000 years ago who left traces of their existence in the form of rock paintings near the city and throughout the Baja California Peninsula. On May 3, 1535, Hernán Cortés arrived in the bay by La Paz and named it "Santa Cruz"; he attempted to start a colony but abandoned his efforts after several years due to logistical problems. In 1596 Sebastián Vizcaíno arrived, giving the area its modern name, La Paz.

From January 10, 1854 to May 8, 1854 it served as the capital of William Walker's Republic of Sonora. The project collapsed due to lack of US support and pressure from the Mexican government to retake the region.

La Paz has a desert climate. The climate of La Paz is typically dry, warm and sunny with a year around average of between 24 and 33 °C (75 and 91 °F). Summer months (July–September) are typically between 34 and 36 °C (93 and 97 °F) and can be humid. The winter months (December–February) are the coldest with temperatures dropping below 15 °C (59 °F) at night, but mostly maxima are from 20 to 25 °C (68 to 77 °F). Breezes from Bahía de La Paz moderate the temperature. The bay also acts as a barrier against seasonal storms in the Gulf of California.

Rainfall is minimal at most times of year, although erratic downpours can bring heavy rains. Rain tends to be concentrated in a short, slightly rainier season that peaks in August and September, following the pattern of the North American Monsoon. The driest season, where it is common to have no rain, occurs March through June. La Paz averages over 300 days of sunshine annually and it's known to be very hot in the summer.

During the summer the cooling Coromuel winds, a weather phenomenon unique to the La Paz area, blow during the night from the Pacific over the Peninsula and into the Bay of La Paz.

As with most of the Gulf of California, the temperature of the water changes substantially over the course of the year, with temperatures around 68 °F during winter and around 85 °F during summer. 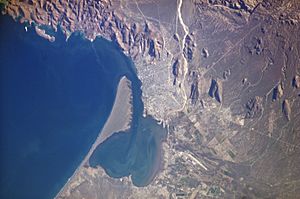 The Bay of La Paz, as seen from the International Space Station. El Mogote peninsula is to the center left.

La Paz is served by Manuel Márquez de León International Airport with flights to the most important cities of Mexico: Mexico City, Guadalajara, Monterrey. Airlines flying into La Paz include Aeroméxico Connect, Volaris and VivaAerobus. Two ferry services operate from the port of Pichilingue outside the city, connecting the Baja California peninsula to the mainland at Mazatlán and Topolobampo, near Los Mochis.

Running along the coast in front of La Paz is a 5 km long Malecon Road. The main purpose of this road is to allow easy movement across the city. However, it quickly became the focal point of tourist related activities with a large number of bars, restaurants and shops opening along its length. Since 2004 extensive development has taken place which included a large sidewalk which offers safety for large numbers of people to walk along the coastal front of La Paz.

In September 2011, a bicycle lane was added to the Malecon road, providing cyclists protection from cars and pedestrians.

La Paz is served mainly by two highways; Mexican Federal Highway 1 that links the south of the state from Cabo San Lucas to the north of the peninsula to Tijuana, and Mexican Federal Highway 19, that connects La Paz with the population of the south pacific towns such as Todos Santos and El Pescadero. It is also served by two secondary roads, the Los Planes highway (286) that connects La Paz with towns such as La Ventana, Ensenada de los Muertos and Los Planes. The other is the Pichilingue highway which links La Paz with its maritime port.

John Steinbeck visited La Paz in 1940. He describes the town in his 1947 novel The Pearl and mentions it extensively in his 1951 travelogue The Log from the Sea of Cortez.

The city is also the setting of the 1967 Scott O'Dell children's novel The Black Pearl , chosen as a Newbery Honor Book in 1968., where La Paz is the home of the main character.

All content from Kiddle encyclopedia articles (including the article images and facts) can be freely used under Attribution-ShareAlike license, unless stated otherwise. Cite this article:
La Paz, Baja California Sur Facts for Kids. Kiddle Encyclopedia.