Ensenada is a coastal city in Mexico, the third-largest in Baja California. Lying 125 kilometres (78 mi) south of San Diego on the Baja California Peninsula, it is locally referred to as La Cenicienta del Pacífico, "The Cinderella of the Pacific."

One of the first settlements founded in the Californias, Ensenada has emerged as a cruise ship destination, aerospace center, and there is a nearby region to the northeast where wine grapes are grown. It is said that the first Vitis vinifera made it to the region's San Ignacio Mission in 1703, when Jesuit Padre Juan de Ugarte planted the first vineyards there.

Situated on the coastline of Bahía de Todos Santos—an inlet of the Pacific Ocean on the peninsula's Gold Coast—the Port of Ensenada is an important commercial, fishing, and tourist port. The city is home to a navy base, army base, and Ensenada Airport, a military airfield which doubles as an airport of entry into Mexico.

Ensenada is the municipal seat and cultural and commercial center of Ensenada Municipality, one of five into which the state is divided. As of 2015, the city of Ensenada had a population of 519,813.

Ensenada is backed by small mountain ranges. Proximity to the Pacific and a warm Mediterranean latitude create mild year-round weather. The rainy season during the winter is short and the area is prone to prolonged droughts, which can threaten its grape harvests. The National Park Constitution of 1857 created the Sierra de Juarez and San Pedro Martir National Parks, which maintain one of the best astronomical observatories in the country.

When the first European explorers discovered the region, the Yuman Indians inhabited the region, of which tribal groups such as the Kiliwa, Paipai and Kumeyaay still exist. These semi-nomadic indigenous people lived in the bay area and interior valleys of the Sierra de Juárez and San Pedro Mártir.

Bahia Todos Santos, on which Ensenada now stands, was first reached by sea by the Portuguese explorer Juan Rodríguez Cabrillo on the vessels El Salvador and Victoria. The city was founded September 17, 1542 under the name San Mateo. In 1602, while mapping the coast of the Californias in search of safe harbors for returning Spanish galleons from Manila to Acapulco, the city was renamed Ensenada de Todos Santos by Sebastián Vizcaíno. Ensenada means 'bay' or 'cove'.

The first permanent settlement was established by the Jesuits during the seventeenth or eighteenth century. After the expulsion of the Jesuits in 1768, the Dominicans took over the representation of Europe in what is now Ensenada. In 1805, José Manuel Ruiz Carillo obtained permission to establish himself in Ensenada, being appointed governor of Baja California and building in Ensenada a house that survived until the final part of that century, despite being briefly taken by William Walker, the self-declared "president" of the Republic of Lower California, in 1853-54.

In 1882, Ensenada was designated the capital of Baja California, and attempts at developing the area were made by the English Mexican Land and Colonization Company. These were interrupted by the Mexican Revolution, which left the area devastated. In 1915, the capital was transferred to Mexicali, and in 1930 the population of Ensenada was only 5,000. During the early part of the twentieth century, the city's name was shortened from Ensenada de Todos Santos to Ensenada, a change made in order to avoid confusion with Todos Santos in Baja California Sur.

The twentieth-century development of Ensenada was assisted by prohibition, which sent Americans and Canadians south of their border in search of entertainment and alcohol, developing first Tijuana, then Rosarito, and finally Ensenada as tourist destinations. The Hotel Riviera del Pacífico was opened in 1930, briefly placing Ensenada on the international glamor map and was visited several times by President Miguel Aleman, international artists and political personalities; yet unlike the Hotel del Coronado, it was never a sustained success (despite giving rise to the claim that the Margarita was invented there). It really flourished only in the early 1950s, at which time Ensenada's population had risen to 20,000. The hotel finally closed in 1964. It was later reopened as a cultural center and museum. By this time, other hotels had opened, and the population and economy of Ensenada had grown and diversified towards their present status.

On January 26 of 2007 Pope Benedict XVI created the Diocese of Ensenada with territory taken from the Archdiocese of Tijuana and Mexicali Diocese, making it a suffragan of the Metropolitan Church of Tijuana.

Ensenada is predominantly a mid-rise building beach city. The only high-rise building within its city limits is the Villa Marina Hotel, though new buildings and resorts in northwestern Ensenada such as Entremar, La Costa, and Viento add to the city's skyline and form the majority of the city's highrise buildings. Emblematic sites representative of Ensenada such as the Civic Plaza (or Plaza of the Three Heads as commonly known to locals), containing sculptures of Mexican heroes Benito Juarez, Venustiano Carranza and Miguel Hidalgo, the enormous Mexican flag, and the Malecon boardwalk - and Naval cruise terminal are found on and near the coast of the bay. Several marinas including Ensenada Cruiseport Village, Hotel Coral & Marina, Punta Morro Resort are located on the city's coast. The Bajamar Oceanfront Golf Resort at Baja Mar is also located nearby to the north, and is a prominent seaside resort of Baja California.

Panorama of Ensenada as viewed from Trinidad Peak

Many of the terrestrial or marine species inhabiting the surrounding the Greater Ensenada area in the Baja California islands are unique. Guadalupe Island, off the coast of the city, is one of the best places in the world for observing the great white shark. The island has been a wildlife sanctuary since 1975.

The city's offshore is host to an array of aquatic mammals including the gray whale, the Guadalupe fur seal and California sea lion; terrestrial mammals include various squirrel species, otters, the ring-tailed cat, coyote, bobcat, puma, and ocelot.

The average rainfall is 280 millimetres (11 in) per year,. For Ensenada's warm summer coastal location, the city's climate is greatly affected by the offshore cold California Current. Due to the current, the late summer and early fall seasons are typically the warmest periods for the city. Santa Ana winds – observed in much of Southern California as well – are responsible for temperature rises at any time of the year. During Santa Anas, wind direction changes and brings warm air from the interior to the coast. Snowfall is rare with the last recent one in January 2007, when the hills south of the city received small amounts of snowfall.

Similar to the rest of the Gold Coast and South Coast of California, Ensenada experiences the periodic May Gray and June Gloom marine layer effects. 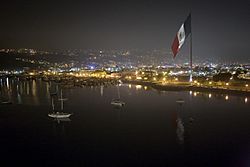 A Bandera monumental in Ensenada at night

The populace of Ensenada is cosmopolitan in composition. A reflection of the cultural dynamics involved in the city, many ethnic groups and nationalities are present. The city has developed, in part, as a retirement community for snowbirds from Canada and the United States. Young Californians seeking to escape higher costs of living, yet still be able to work in California, have obtained homes in the area.

Ensenada is the third largest city on the Baja California Peninsula, where most of the population lives in Ensenada, Mexicali and Tijuana.

The predominant language of the city is Spanish, though English is spoken to a degree in tourist areas and the center.

Gallery of points of interest in Ensenada

The Port of Ensenada has a large influence on the civic economy. Ensenada is home to the only deep-water port in the state of Baja California and on the Baja California Peninsula. The port is part of standard shipping routes that directly link it with the Mexican cities of La Paz, Manzanillo, Mazatlán, Acapulco and Lázaro Cárdenas; the American cities of San Diego, Long Beach and Los Angeles; the Guatemalan city of Puerto Quetzal, the Chilean city of Valparaíso, the Japanese city of Yokohama, and the Chinese city of Hong Kong. Ensenada is where the Fender standard series guitars and basses are produced. 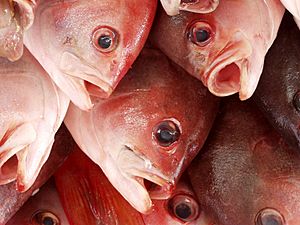 In addition to revenue generated by docking cruise ships, fishing accounts for a large part of the economy. More than 90 species of fish are commercially fished in Ensenada; the most important fisheries are tuna, shrimp, California spiny lobster, abalone, sea urchin, sardine, mackerel and seaweed. A large percentage of all catches are exported to East Asia. A tuna embargo imposed on Mexico during the 1990s caused most of the fishing fleet to relocate to the ports of Guaymas, and Mazatlán, further south. To survive, Ensenada's tuna industry has shifted its focus to tuna farming, exporting the highly valued meat almost exclusively to Japan. Ensenada has been known for sports fishing over 50 years. Each year hundreds of anglers head for Ensenada to go fishing and take advantage of the shorter distances needed to travel by sea to get to the big catch.

The municipality of Ensenada has three main agricultural zones: the Guadalupe-Calafia valleys to the north, the Ojos Negros valley to the east and the San Quintin valley to the south. The main crops are grapes, olives, tomato, wheat, alfalfa, asparagus, green onions and broccoli. 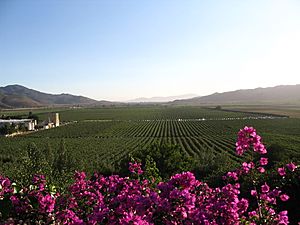 One of the earliest activities in the Ensenada region was gold and silver mining, and some of these mines remain in limited operation. In recent years, very large amounts of gravel have been extracted from creek beds in rural areas and exported for infrastructure works in California in the US. However, this has been a controversial activity, as environmentalists have argued that depleting the creekbeds will decrease the amount of water that is absorbed by the soil during the brief rainy season, negatively impacting the agriculture. As of November 2005, the extraction of gravel remains unchecked. Said extraction activities have been linked to former Governor Ernesto Ruffo.

Ensenada's diversity as a city is in part attributed to Spanish, Russian, and American influences. Spanish missionaries and Russian settlers began the growth of the wine industry in the city. Reminiscent of this time period are Russian museums in the city.

Typical food in Ensenada consists of fish tacos, which originated in the city,

Ensenada has three sister cities as designated by Sister Cities International, including relations formalized between other cities.

All content from Kiddle encyclopedia articles (including the article images and facts) can be freely used under Attribution-ShareAlike license, unless stated otherwise. Cite this article:
Ensenada, Baja California Facts for Kids. Kiddle Encyclopedia.