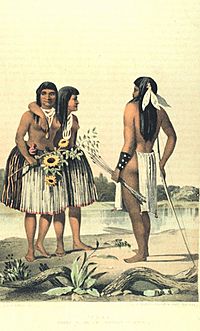 The Quechan (or Yuma) (Quechan: Kwatsáan 'those who descended') are an aboriginal American tribe who live on the Fort Yuma Indian Reservation on the lower Colorado River in Arizona and California just north of the Mexican border. Despite their name, they are not related to the Quechua people of the Andes. Members are enrolled into the Quechan Tribe of the Fort Yuma Indian Reservation. The federally recognized Quechan tribe's main office is located in Winterhaven, California. Its operations and the majority of its reservation land are located in California, United States.

The term Patayan is used by archaeologists to describe the prehistoric Native American cultures who inhabited parts of modern day Arizona, California and Baja California. These areas included territory near the Colorado River Valley, the nearby uplands, and north to the vicinity of the Grand Canyon. The prehistoric people may have been ancestral to the Quechan. They practiced floodplain agriculture where possible, but relied heavily on hunting and gathering. Subgroups include the River Yuman, Delta–Californian, and Upland California

The historic Yuman-speaking people in this region were skilled warriors and active traders, maintaining exchange networks with the Pima in southern Arizona and with peoples of the Pacific coast.

The first significant contact of the Quechan with Europeans was with the Spanish explorer Juan Bautista de Anza and his party in the winter of 1774. Relations were friendly. On Anza's return from his second trip to Alta California in 1776, the chief of the tribe and three of his men journeyed to Mexico City to petition the Viceroy of New Spain for the establishment of a mission. The chief Palma and his three companions were baptized in Mexico City on February 13, 1777. Palma was given the Spanish baptismal name Salvador Carlos Antonio.

Spanish settlement among the Quechan did not go smoothly; the tribe rebelled from July 17–19, 1781 and killed four priests and thirty soldiers. They also attacked and damaged the Spanish mission settlements of San Pedro y San Pablo de Bicuñer and Puerto de Purísima Concepción, killing many. The following year, the Spanish retaliated with military action against the tribe.

After the United States annexed the territories after winning the Mexican-American War, it engaged in the Yuma War from 1850 to 1853. During which, the historic Fort Yuma was built across the Colorado River from the present day Yuma, Arizona.

Estimates for the pre-contact populations of most native groups in California have varied substantially (see population of Native California). Alfred L. Kroeber (1925:883) put the 1770 population of the Quechan at 2,500. Jack D. Forbes (1965:341–343) compiled historical estimates and suggested that before they were first contacted, the Quechan had numbered 4,000 or a few more.

Kroeber estimated the population of the Quechan in 1910 as 750. By 1950, there were reported to be just under 1,000 Quechan living on the reservation and another 1,100+ off it (Forbes 1965:343). The 2000 census reported a resident population of 2,376 persons on the Fort Yuma Indian Reservation, only 56.8 percent of whom said they were of solely Native American heritage. More than 27 percent identified as white.

All content from Kiddle encyclopedia articles (including the article images and facts) can be freely used under Attribution-ShareAlike license, unless stated otherwise. Cite this article:
Quechan Facts for Kids. Kiddle Encyclopedia.