Yuma County is a county in the southwestern corner of the U.S. state of Arizona. As of the 2010 census, its population was 195,751. The county seat is Yuma.

The county borders the Colorado River to the southwest, with three other states across the river: California of the United States and the Mexican state of Baja California to the west, and Sonora, Mexico, 60 miles to the south.

Long settled by Native Americans of indigenous cultures for thousands of years, this area was controlled by the Spanish Empire in the colonial era. In the 19th century, it was part of independent Mexico before the Mexican–American War and Gadsden Purchase.

Yuma County was one of four original Arizona counties created by the 1st Arizona Territorial Legislature. The county territory was defined as being west of longitude 113° 20' and south of the Bill Williams River. Its original boundaries remained the same until 1982, when La Paz County was created from its northern half.

The original county seat was the city of La Paz; in 1871 it was moved to Arizona City, later renamed as Yuma in 1873.

Yuma County is in the west, and northwestern regions of the north-south Sonoran Desert that extends through Sonora state Mexico to the border of northern Sinaloa state. West of the county across the Colorado River in southeast California is the Colorado Desert, (a northwestern subregion of the Sonoran Desert). North of the county, with La Paz County the regions merge into the southeastern Mojave Desert. Southwest of Yuma County, is the entirety of Northwest Mexico, at the north shoreline of the Gulf of California, and the outlet of the Colorado River into the Colorado River Delta region, now altered with lack of freshwater inputs. Notable mountains in Yuma County include the Gila Mountains and the Tule Mountains.

There were 53,848 households out of which 36.9% had children under the age of 18 living with them, 62.3% were married couples living together, 11.2% had a female householder with no husband present, and 22.6% were non-families. 18.5% of all households were made up of individuals and 8.9% had someone living alone who was 65 years of age or older. The average household size was 2.86 and the average family size was 3.27. 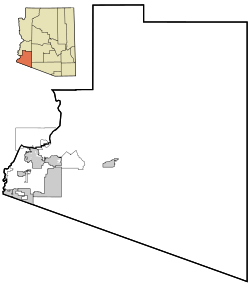 Map of Yuma County showing incorporated and unincorporated areas as well as Indian reservations in the county.

The population ranking of the following table is based on the 2010 census of Yuma County.

All content from Kiddle encyclopedia articles (including the article images and facts) can be freely used under Attribution-ShareAlike license, unless stated otherwise. Cite this article:
Yuma County, Arizona Facts for Kids. Kiddle Encyclopedia.