Dateland is both a CDP and a populated place in Yuma County, Arizona, United States. It is in an area well known for date palm dates. 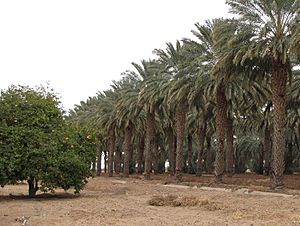 Rows of date palms behind the Dateland Travel Center

The community is part of the Yuma Metropolitan Statistical Area.

The Dateland Food Court is home to the self-proclaimed "World Famous Date Shakes."

Dateland began as a road stop in the 1920s. During World War II, Dateland was home to Dateland Air Force Auxiliary Field. After the closure of the airfield, the land was subdivided in the 1970s. The developers of one subdivision on the former airfield, El Camino Del Sol, were convicted of fraud in 1977.

This area has a large amount of sunshine year round due to its stable descending air and high pressure. According to the Köppen Climate Classification system, Dateland has a mild desert climate, abbreviated "Bwh" on climate maps.

All content from Kiddle encyclopedia articles (including the article images and facts) can be freely used under Attribution-ShareAlike license, unless stated otherwise. Cite this article:
Dateland, Arizona Facts for Kids. Kiddle Encyclopedia.