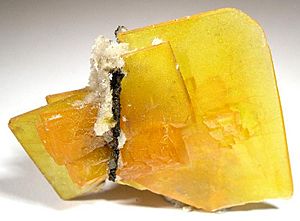 Wulfenite specimen from the old King of Arizona mine

The Kofa Mountains (Yavapai: Wi:kasayeo) of Yuma and La Paz counties in Arizona is the central mountain range of the Kofa National Wildlife Refuge. The range lies about 60 miles northeast of Yuma in the southwestern part of the state. Kofa Wilderness takes up 547,719 acres of the refuge, making it the second largest wilderness area in Arizona. The equally extensive Castle Dome Mountains comprise the southern refuge border; the western end of the Tank Mountains are in the southeast of the wildlife refuge, and the New Water Wilderness in the New Water Mountains ends the extension of the Kofa National Wildlife Refuge to the north. Scenic "King Valley" is south of the Kofa Mountains between the Castle Dome Mountains.

These mountains are home to a number of endemic or rare species including the Kofa Mountain Barberry Berberis harrisoniana. In addition, it contains the only native California fan palms in the state of Arizona located high up in Palm Canyon. These are relicts of the ice age when the range of California fan palms was much larger than its isolated groves today.

The closest community to the Kofa Mountains is Quartzsite, 30 miles northwest on Interstate 10. Access roads to the range depart a north-south stretch of US 95, five miles to the west. There are a number of winter homes in King Valley.

The Kofa Mountains are named for the rich King of Arizona gold mine, discovered in King Valley in 1896. The mine used to stamp its property "K of A" and is commonly known as the Kofa Mine. The old mine and its surroundings are private property. The Kofa, Arizona post office was established June 5, 1900 and was discontinued August 27, 1928. Some of the old buildings are still in use as winter homes.

All content from Kiddle encyclopedia articles (including the article images and facts) can be freely used under Attribution-ShareAlike license, unless stated otherwise. Cite this article:
Kofa Mountains Facts for Kids. Kiddle Encyclopedia.