Quartzsite is a town in La Paz County, Arizona, United States. According to the 2010 census, the population was 3,677.

Interstate 10 runs directly through Quartzsite and is at the intersection of U.S. Route 95 and Arizona State Route 95 with I-10.

According to the United States Census Bureau Quartzsite is all land and has a total area of 36.3 sq mi (94.0 km2).

The town has a hot desert climate (Köppen BWh) with mild to warm winters from November to March and hot to extreme summers for the remainder of the year. In the middle of summer, Quartzsite is one of the hottest places in the United States and has recorded temperatures as high as 122 °F or 50.0 °C on 28 July 1995.

There were 1,850 households out of which 5.0% had children under the age of 18 living with them, 59.0% were married couples living together, 2.9% had a female householder with no husband present, and 36.4% were non-families. 31.5% of all households were made up of individuals and 19.1% had someone living alone who was 65 years of age or older. The average household size was 1.81 and the average family size was 2.18.

The mine in the Quartzsite was owned and operated by Jack Stetler but was shut down in 1957, upon a move to Brazil for iron ore. 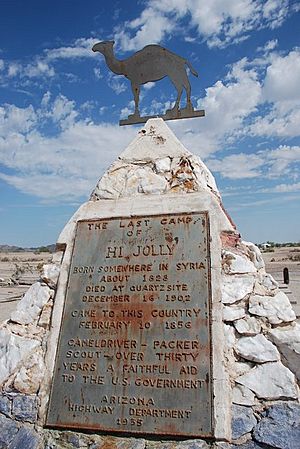 Quartzsite is the burial place of Hi Jolly (Hadji Ali), an Ottoman citizen of Greek-Syrian parentage, who took part in the experimental US Camel Corps as a camel driver.

Quartzsite is also the site of Joanne's Gum Museum, which is open to the public and features a large collection of gum wrappers from around the world.

The Town of Quartzsite operates demand response buses under the name Camel Express.

All content from Kiddle encyclopedia articles (including the article images and facts) can be freely used under Attribution-ShareAlike license, unless stated otherwise. Cite this article:
Quartzsite, Arizona Facts for Kids. Kiddle Encyclopedia.