The community first started as an Army Air Corps rest camp during World War II on the shores of Lake Havasu. In 1958, Robert P. McCulloch purchased 3,353 acres (13.57 km2) of property on the east side of Lake Havasu along Pittsburgh Point, the peninsula that eventually would be transformed into "the Island". After four years of planning, McCulloch Properties acquired another 13,000 acres of federal land in the surrounding area. Lake Havasu City was established on September 30, 1963 by a resolution of the Mohave County Board of Supervisors as the Lake Havasu Irrigation and Drainage District, making it a legal entity. (The act is referenced in resolution #63-12-1.) The city was incorporated in 1978.

The London Bridge crosses a narrow channel that leads from Lake Havasu (a segment of the Colorado River) to Thompson Bay (also on the Colorado River). It was bought for US $2.5 million from the City of London when the bridge was replaced in 1968. The bridge was disassembled, and the marked stones were shipped to Lake Havasu City and reassembled for another US $7 million. Since its inauguration on October 5, 1971, it has attracted thousands of visitors each year.

McCulloch gave an acre of land to London. When Lake Havasu City wanted to use this land for a visitors' center, it leased it back for a quit rent of a Hopi Kachina figure.

Lake Havasu City is an active destination for a wide range of people. During the spring months, the community is joined by university students during Spring Break. With its reputation as a party community, Lake Havasu has twice been featured during MTV's Spring Break coverage. For boaters, March to September are the prime months on Lake Havasu. The city is also home to the International World Jet Ski Final Races, multiple professional fishing tournaments, custom boat regattas, the Western Winter Blast pyrotechnics convention, Havasu 95 Speedway, the Chilln-n-Swilln Beer Festival annual charity event, the Havasu Triathlon, the Havasu Half Marathon and the Havasu Island Hot Air Balloon Fest & Fair.

During the winter months, the community is joined by retirees from colder regions of the country and Canada. During this period, multiple events are held on McCulloch Boulevard. Typically during the second weekend of February, McCulloch Boulevard is home to Winterfest, an annual event which draws thousands of visitors and residents for two days of food, activities, entertainment, and products from over 200 vendors from across the United States. 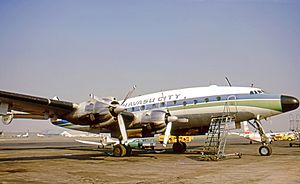 The only surface access to Lake Havasu City is by road via Arizona State Route 95, which meets Interstate 40 to the north of the city and Interstate 10 to the south. C.V. Wood, who designed Disneyland, was hired by Robert McCulloch to lay out Lake Havasu's unique road system.

In the early stages of development of the city, McCulloch Properties operated a fleet of secondhand airliners such as the Lockheed Constellation and the Lockheed L-188 Electra fly prospective property purchasers to the area from California and elsewhere in the USA.

Lake Havasu City holds the all-time record high temperature in Arizona history with 128 °F recorded on June 29, 1994. This temperature is also the highest for a town or city in the Western Hemisphere. On December 31, 2014, snow fell on Lake Havasu City.

There were 17,911 households out of which 22.5% had children under the age of 18 living with them, 59.4% were married couples living together, 7.7% had a female householder with no husband present, and 29.0% were non-families. 22.8% of all households were made up of individuals and 11.8% had someone living alone who was 65 years of age or older. The average household size was 2.32 and the average family size was 2.69.

In 2007, Lake Havasu was named one of the Top 100 places to live in America by RelocateAmerica. CNN has also listed the community among their top retirement cities in the country.

Day of the Wolves is a 1971 heist movie starring Richard Egan. It was directed, written and produced by Ferde Grofe Jr.. It was the first movie to be made on location in the new town of Lake Havasu City, Arizona.

The London Bridge's relocation to Arizona was the basis of a 1985 made-for-TV movie Bridge Across Time (also known as Arizona Ripper or Terror at London Bridge), directed by E.W. Swackhamer and starring David Hasselhoff and Stepfanie Kramer. In the film, a series of murders in Lake Havasu is attributed to the spirit of Jack the Ripper, whose soul is transported to America in one of the bricks of the London Bridge.

In the film Falling Down (1993), Robert Duvall's character Sergeant Prendergast speaks about how he plans to retire in Lake Havasu City.

MTV featured Lake Havasu during their Spring Break coverage in 1995 and 2004.

Piranha 3-D was filmed in Lake Havasu in 2009. The city was called Lake Victoria in the film. It was directed by Alexandre Aja and starred Adam Scott, Elisabeth Shue, Kelly Brook, Richard Dreyfuss, Jerry O'Connell, Ving Rhames and Christopher Lloyd. The film is a remake of the 1978 film Piranha. It debuted in Lake Havasu on Thursday, August 19, 2010, and was released nationally on August 20, 2010.

In 2009 Travis Pastrana and the rest of the Nitro Circus crew filmed an entire episode of their TV show in Lake Havasu that aired during Season 2.

The city was featured in the season 6 premiere of The Great Food Truck Race.

Lake Havasu City from the west

All content from Kiddle encyclopedia articles (including the article images and facts) can be freely used under Attribution-ShareAlike license, unless stated otherwise. Cite this article:
Lake Havasu City, Arizona Facts for Kids. Kiddle Encyclopedia.