Kingman is a city in, and the county seat of, Mohave County, Arizona, United States. It is named after Lewis Kingman, a civil engineer. According to the 2010 census, the population of the city is 28,068. Kingman is located approximately 105 miles (169 km) southeast of Las Vegas, Nevada and about 165 miles (266 km) northwest of the state capital, Phoenix.

Lt. Edward Fitzgerald Beale, a U.S. Navy officer in the service of the U.S. Army Corps of Topographical Engineers, was ordered by the U.S. War Department to build a federal wagon road across the 35th Parallel. His secondary orders were to test the feasibility of the use of camels as pack animals in the southwestern desert. Beale traveled through the present day Kingman in 1857 surveying the road and in 1859 to build the road. Beale's Wagon Road became part of Highway 66 and Interstate Highway 40. Remnants of the wagon road can still be seen in White Cliffs Canyon in Kingman.

Kingman, Arizona, was founded in 1882, when Arizona was still Arizona Territory. Situated in the Hualapai Valley between the Cerbat and Hualapai mountain ranges, Kingman is known for its very modest beginnings as a simple railroad siding near Beale’s Springs in the Middleton Section along the newly constructed route of the Atlantic and Pacific Railroad. The city of Kingman was named for Lewis Kingman, who surveyed along the Atlantic and Pacific Railroad's right-of-way between Needles, Calif., and Albuquerque, N.M. Lewis Kingman supervised the building of the railroad from Winslow, Ariz. to Beale's Springs, which is near the present location of the town of Kingman.

The Mohave County seat originally was located in Mohave City from 1864 to 1867. The portion of Arizona Territory west of the Colorado River was transferred to Nevada in 1865 after Nevada's statehood, and became part of Lincoln County, Nevada later Clark County, Nevada. The remaining territory of Pah-Ute County became part of Mohave County. Its seat was moved to Hardyville (which is now within Bullhead City) in 1867. The county seat transferred to the mining town of Cerbat in 1873, then to Mineral Park near Chloride in 1877. In 1887, the county seat was moved to Kingman after some period of time without a permanent county seat, the instruments and records of Mohave County government were taken clandestinely from Chloride and moved to Kingman in the middle of the night during this final transfer of the county seat.

During World War II, Kingman was the site of a U.S. Army Air Force (USAAF) airfield. The Kingman Army Airfield was founded at the beginning of WW II as an aerial gunnery training base. It became one of the USAAF's largest, training some 35,000 soldiers and airmen. The airfield and Kingman played a significant role in this important era of America's history. Following the war, the Kingman Airfield served as one of the largest and best-known reclamation sites for obsolete military aircraft.

Postwar, Kingman experienced growth as several major employers moved into the vicinity. In 1953 Kingman was used to detain those men accused of practicing polygamy in the Short Creek raid, which was at the time one of the largest arrests in American history. In 1955, Ford Motor Company established a proving ground (now one of the Chrysler Proving Grounds) in nearby Yucca, Arizona at the former Yucca Army Airfield. Several major new neighborhoods in Kingman were developed to house the skilled workers and professionals employed at the proving ground, as Kingman was the only sizable, developed town within a convenient distance. Likewise, the development of the Duval copper mine near adjacent Chloride, Arizona, and construction of the Mohave Generating Station in nearby Laughlin, Nevada, in 1971 contributed to Kingman's population growth. The location of a General Cable plant at what was to become the Kingman Airport Industrial Park provided a steady employment base as well.

According to the United States Census Bureau, the city has a total area of 30.0 square miles (78 km2), all of it land.

Kingman sits on the eastern edge of the Mojave Desert, but is located in a "cold semi-arid climate" (Köppen BSk) instead of the desert. The BSk climate type receives slightly more precipitation than the BWh hot desert climate found to the south and west, and the wintertime low temperatures are significantly colder. Kingman's higher elevation and location between the Colorado Plateau and the Lower Colorado River Valley keeps summer high temperatures away from the extremes (115 °F (46 °C) or more) experienced by Phoenix and the Colorado River Valley. The higher elevation also contributes to winter cold and occasional snowfall. Summer daytime highs reach above 90 °F (32 °C) frequently, but rarely exceed 107 °F (42 °C). Summertime lows usually remain between 60 to 70 °F (16 to 21 °C). Winter highs are generally mild, ranging from around 50 to 65 °F (10 to 18 °C), but winter nighttime lows often fall to freezing, with significantly lower temperatures possible. Kingman occasionally receives a dusting of snow in the winter, though it rarely remains on the ground for longer than the mid-to-late morning. 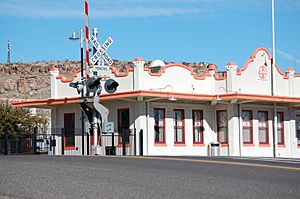 The Amtrak station in downtown Kingman.

The Kingman Airport is located nine miles northeast of Kingman on Arizona State Route 66. The airport was originally built as Kingman Army Air Field during World War II and was home to the Kingman Aerial Gunnery School. The airport was turned over to Mohave County for civilian use in 1949. There are air ambulance and air charter services; however, there are no commercial flights to or from this airport. It is not a hub for major airlines. The closest airport in which to fly commercially is McCarran International Airport, located in Las Vegas Nevada, approximately 104 miles northwest from Kingman. The airport now primarily exists to be used as a location for long-term aircraft storage due to its suitable large ramp space and a long decommissioned runway. Kingman is a non-towered airport.

Located downtown, the Amtrak station has daily service on the Amtrak Southwest Chief between Los Angeles and Chicago. The historically significant station is constructed in Mission Revival Style architecture. Prior to the establishment of Amtrak in 1971, the building had fallen into disrepair. A total renovation was completed in 2010. The station also houses a model railroad museum. Amtrak Thruway Motorcoach offers connecting service to Las Vegas.

Kingman is located on the Southern Transcon route of the BNSF Railway which is the main transcontinental route between Los Angeles and Chicago, which carries approximately 100 to 150 freight trains per day.

In August 2012, the Kingman Terminal Railroad (KGTR) opened at the Kingman Airport Authority and Industrial Park. The KGTR is a short line railroad owned by Patriot Rail. Patriot Rail owns and operates 13 railroads in 13 states across the U.S. The KGTR interchanges with BNSF and delivers to businesses at the industrial park.

The Kingman Explosion, also known as the Doxol Disaster or Kingman BLEVE, was a catastrophic boiling liquid expanding vapor explosion (BLEVE) that occurred on July 5, 1973 in Kingman. The explosion occurred during a propane transfer from a Doxol railroad car to a storage tank on the Getz rail siding near Andy Devine Avenue/Route 66.

Firefighters Memorial Park in Kingman is dedicated to those 11 firefighters who died in the BLEVE. 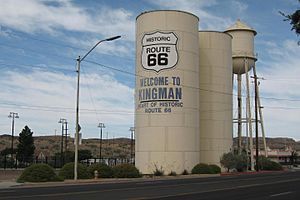 A "Welcome to Kingman" sign on a water tower, marking its connection with Route 66

Kingman has been featured as a filming location for several movies and television shows.

"Aliens in Kingman" a short film (IMDb) was filmed entirely in Kingman.

In literature and publications

According to Kingman's 2019 Comprehensive Annual Financial Report, [1] the top employers in the city are: 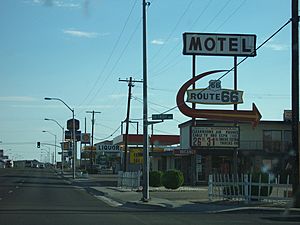 Motels along Andy Devine Avenue in Kingman in 2004

All content from Kiddle encyclopedia articles (including the article images and facts) can be freely used under Attribution-ShareAlike license, unless stated otherwise. Cite this article:
Kingman, Arizona Facts for Kids. Kiddle Encyclopedia.