The Hualapai Mountains (Mojave language: Amat 'Avii Kahuwaaly), are a mountain range in Mohave County, near Kingman in Arizona. "Hualapai" means "People of the tall Pines" in the Hualapai language.

The mountain range consists of five main peaks: Dean Peak, Getz Peak, Aspen Peak, and Hayden Peak overlooking the broad Hualapai Valley to the north toward Kingman; and the tallest, Hualapai Peak, on the south.

The Hualapai Mountains are covered in pine trees, namely pinyon pine. Above 5,500 feet (1,700 m) the ponderosa pine appear. Most pine trees are found on the cooler north facing slopes. The habitat is mainly forest, and has many natural springs.

Bear, elk, mule deer, mountain lion, javelina, and other animals can be found here. Mountain lion and bear have been drawn to civilized areas like Pinion Pines and Atherton Acres due to the large deer population. There are some animals only native to the Hualapai Mountain range, including a breed of ground squirrel, and tarantula.

Panorama of the Hualapai Mountains taken from Kingman in December 2009. 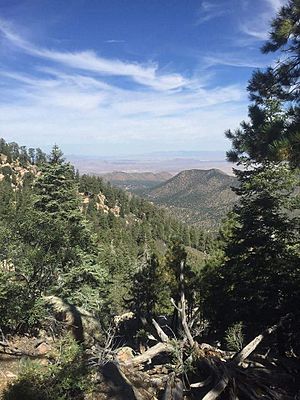 View of Kingman, Arizona, from the top of the Hualapai Mountains

Hualapai Mountain Park is a county park and was first developed in the 1930s by the Civilian Conservation Corps. The name Hualapai is derived from the name of the Indian tribe that once lived here. The park encompasses over 2,300 acres (9.3 km2) with elevations ranging from 4,984 feet (1,519 m) to 8417.

There are 10 miles (16 km) of hiking trails ranging in difficulty, and an ATV trail head which leads to the trails. There is a designated fire escape route to get down and out of the park during wildfires.

The park is managed by the Mohave County Parks department and the Hualapai Mountain Park staff. There are small signs around the park area telling the history of the park, the types of vegetation, and about other features.

A number of residential communities are located in the mountains and foothills. They are all unincorporated areas and are governed by Mohave County. The Pinion Pine community has two fire stations with one station staffed full-time.

The 'Pine Lake' community has a volunteer fire department, which also holds seasonal events for the neighborhood. There is a lodge, privately owned cabins for rent, and permanent housing. The lake is privately owned by the Pine Lake Inn Bed and Breakfast and not available to the public.

Pine Lake is visited regularly by a local herd of elk, and many mule deer wander around daily.

From the Pine Lake Community there are a number of dirt roads that lead out into the mountains. There are primarily two main routes out of the community, Flag Mine Road and the ATV trail head located at Hualapai Mountain Park which alleviates some of the traffic in the neighborhood.

All content from Kiddle encyclopedia articles (including the article images and facts) can be freely used under Attribution-ShareAlike license, unless stated otherwise. Cite this article:
Hualapai Mountains Facts for Kids. Kiddle Encyclopedia.