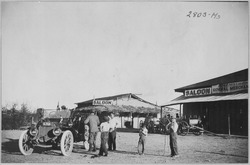 Ehrenberg, also historically spelled "Ehrenburg", is an unincorporated community and census-designated place (CDP) in La Paz County, Arizona, United States. The population was 1,470 at the 2010 census. Ehrenberg is named for its founder, Herman Ehrenberg.

Ehrenberg is located on the Colorado River, which forms the border with Riverside County, California, near the city of Blythe. It is situated close to Interstate 10, at the southern end of the Parker Valley and next to the Palo Verde Valley.

In 1863, German mining engineer Herman Ehrenberg was hired to survey a new townsite along the Colorado River, approximately 6 miles (9.7 km) from La Paz, Arizona. The town, named Mineral City, began to grow in 1866, after a new landing was established there, supported by the steamboat captains of the George A. Johnson Company. Mineral City now attracted miners and many businessmen away from La Paz and by September 20, 1869 had grown large enough to win a post office. The same year it was renamed Ehrenberg.

Over the next several years the town continued to grow, surpassing La Paz. By 1875 there were 500 residents. The population of La Paz dwindled, and many storekeepers relocated to Ehrenberg.

Around the start of the 20th century, railroads began to bypass the river as the major means of transporting goods. The town's population declined, and it lost its post office on December 31, 1913.

Many of the surviving older buildings in town were torn down in the 1950s to make way for a trailer park.

Ehrenberg is located on the Colorado River and border of Arizona and California, on the Arizona side. Ehrenberg is approximately 145 miles west of Phoenix.

Although Ehrenberg is geographically located in the Mountain Time Zone, due to its proximity to Blythe CA and the fact that Arizona does not observe Daylight savings, Ehrenberg observes Pacific Time year round.

This area has a large amount of sunshine year round due to its stable descending air and high pressure. According to the Köppen Climate Classification system, Ehrenberg has a mild desert climate, abbreviated "Bwh" on climate maps.

There were 545 households, out of which 31.9% had children under the age of 18 living with them, 45.7% were married couples living together, 8.8% had a female householder with no husband present, and 36.1% were non-families. 27.7% of all households were made up of individuals, and 9.5% had someone living alone who was 65 years of age or older. The average household size was 2.5 and the average family size was 3.1.

All content from Kiddle encyclopedia articles (including the article images and facts) can be freely used under Attribution-ShareAlike license, unless stated otherwise. Cite this article:
Ehrenberg, Arizona Facts for Kids. Kiddle Encyclopedia.