Kids Encyclopedia Facts
This page is about the county in Arizona. For the city in Bolivia, see La Paz. For other uses, see La Paz (disambiguation). 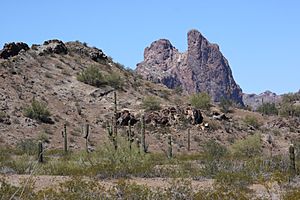 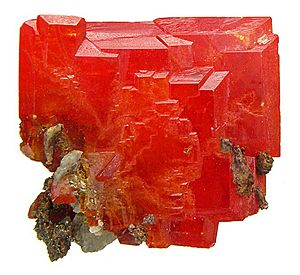 La Paz County is a county in the western part of the U.S. state of Arizona. As of the 2010 census, its population was 20,489, making it the second-least populous county in Arizona. The county seat is Parker. The name of the county is the Spanish word for "the peace", and is taken from the early settlement (now ghost town) of La Paz along the Colorado River.

La Paz County was established in 1983 after voters approved separating the northern portion of Yuma County, making it the only county to be established after Arizona became a state in 1912. The county did not have a large enough tax base to begin supporting a separate county government immediately and had to rely on state money at first. As a result, Arizona laws were changed to make splitting other existing counties much more difficult. Under the revised Arizona laws, a county shall not be formed or divided by county initiative unless each proposed county would have all of the following characteristics: (1) at least three-fourths of one percent of the total state assessed valuation and at least the statewide per capita assessed valuation; (2) a population of at least three-fourths of one percent of the total state population according to the most recent United States decennial census; (3) at least one hundred square miles of privately owned land; (4) common boundaries with either (a) at least three other existing or proposed counties; or (b) at least two other existing or proposed counties and the state boundary. A county formation commission is required to be formed to evaluate the feasibility of the proposed county. A proposal to divide a county must be approved by a majority of the votes cast in each proposed new county.

The Colorado River Indian Reservation is located in the western portion of the county. Part of the reservation extends westward into San Bernardino and Riverside Counties in California. 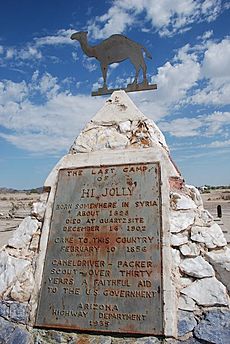 La Paz County hosts a variety of flora and fauna. The endangered California Fan Palm, Washingtonia filifera grows in a few spots in the county.

Avi Suquilla Airport (FAA LID: P20) is a public use airport located one nautical mile (1.9 km) east of the central business district of Parker, a town in La Paz County. It is owned by the Colorado River Indian Tribes. 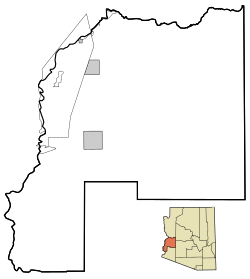 The population ranking of the following table is based on the 2010 census of La Paz County.

All content from Kiddle encyclopedia articles (including the article images and facts) can be freely used under Attribution-ShareAlike license, unless stated otherwise. Cite this article:
La Paz County, Arizona Facts for Kids. Kiddle Encyclopedia.