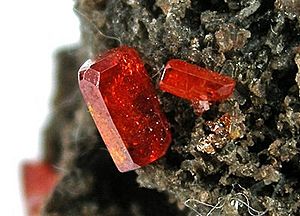 Vanadinite from the old Hamburg or Princess mine [1], Trigo Mountains

Specifics of the range

The Trigo Mountains are north-south trending with the northern and central range arcing to the northeast. The curving range parallels the similar-(half the size) curving range to the southeast, the Chocolate Mountains, and the arc-curving ranges would be presumed to be a resultant of the same time-framed thrust-faulting event during the formation of the Basin and Range Province.

The highest peak of the Trigos is Mohave Peak at 2,771 feet (845 m) in the southeast, isolated from the main trend of the range. The largest peak that terminates the mountain range in the north is unnamed, at 2,170 feet (661 m) as part of the North Trigo Peaks.

Access from the south is made at the Colorado River at Martinez Lake, and then a 4-wheel drive dirt road to the Red Cloud Mine. Access to the northern regions is more general, by way of the valley containing the Colorado River Indian Reservation on the east bank of the river in Arizona.

Blythe, California is 12 miles (19 km) northwest of the northern ranges; Yuma, Arizona-Winterhaven, California are about 30 miles (48 km) south of the central range.

All content from Kiddle encyclopedia articles (including the article images and facts) can be freely used under Attribution-ShareAlike license, unless stated otherwise. Cite this article:
Trigo Mountains Facts for Kids. Kiddle Encyclopedia.