The La Posa Plain is a wide, generally flat plain in western Arizona near the Colorado River and is on the west and northwest border of the Kofa National Wildlife Refuge. The plain lies to the east of the Colorado River Indian Reservation and east of the Dome Rock and Trigo Mountains. Quartzsite, Arizona, lies on the western part of the plain, which crosses both Interstate 10 and U.S. Route 95. 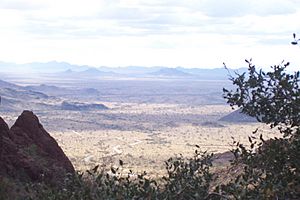 The northern reaches of the plain is crossed by the Bouse Wash west of Bouse and extends on to east of Parker, terminating along the Cactus Plain south of the Buckskin Mountains. Arizona State Route 72 crosses the plain between Bouse and Parker.

All content from Kiddle encyclopedia articles (including the article images and facts) can be freely used under Attribution-ShareAlike license, unless stated otherwise. Cite this article:
La Posa Plain Facts for Kids. Kiddle Encyclopedia.