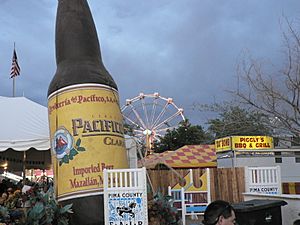 Pima County ( PEE-mə) is a county in the south central region of the U.S. state of Arizona. As of the 2020 census, the population was 1,043,433, making it Arizona's second-most populous county. The county seat is Tucson, where most of the population is centered. The county is named after the Pima Native Americans who are indigenous to this area.

Pima County includes the entirety of the Tucson Metropolitan Statistical Area, and it is the third largest metropolitan area in the Southwestern United States.

Pima County, one of the four original counties in Arizona, was created by the 1st Arizona Territorial Legislature with land acquired through the Gadsden Purchase from Mexico in 1853. The original county consisted of all of Arizona Territory east of longitude 113° 20' and south of the Gila River. Soon thereafter, the counties of Cochise, Graham and Santa Cruz were carved from the original Pima County.

The award-winning Sonoran Desert Conservation Plan (SDCP) is Pima County’s plan for balancing the conservation and protection of our cultural and natural resource heritage with our efforts to maintain an economically vigorous and fiscally responsible community. Broadly defined, the SDCP considered the following elements: critical habitats and biological corridors, riparian areas, mountain parks, historical and cultural preservation, and ranch conservation. All five elements, along with fiscal analysis, were critical in forming a viable land management plan for Pima County. 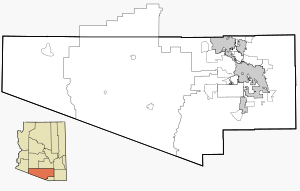 Map of the incorporated and unincorporated cities and towns in Pima County. Also shown are the borders for the Indian Reservations in the county. 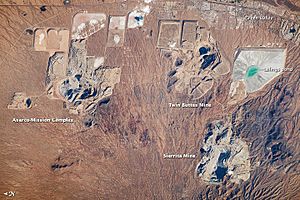 Astronaut photo of the open-pit copper mines adjacent to Green Valley, 2010. Note that north is to the left.

The population ranking of the following table is based on the 2010 census of Pima County.

All content from Kiddle encyclopedia articles (including the article images and facts) can be freely used under Attribution-ShareAlike license, unless stated otherwise. Cite this article:
Pima County, Arizona Facts for Kids. Kiddle Encyclopedia.