The community consists of the Lukeville Port of Entry border crossing into Sonoyta, Sonora, Mexico, together with a gas station, a duty-free shop, a few outlets that sell Mexican automobile insurance, and a terminal for buses that are bound for Phoenix and Tucson. It is the terminus of State Route 85 and is located entirely within Organ Pipe Cactus National Monument. 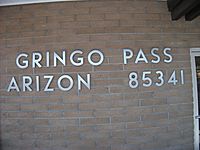 The post office building at Lukeville, which still displays the older crossing name of Gringo Pass.

This area has a large amount of sunshine year round due to its stable descending air and high pressure. According to the Köppen Climate Classification system, Lukeville has a mild desert climate, abbreviated "Bwh" on climate maps.

All content from Kiddle encyclopedia articles (including the article images and facts) can be freely used under Attribution-ShareAlike license, unless stated otherwise. Cite this article:
Lukeville, Arizona Facts for Kids. Kiddle Encyclopedia.