Summerhaven is a small unincorporated community and census-designated place (CDP) on Mount Lemmon in the Santa Catalina Mountains north of Tucson in Pima County, Arizona, United States. As of the 2010 census it had a permanent population of 40. Summerhaven sits at an elevation of approximately 7,600 to 8,200 feet (2,300 to 2,500 m) above sea level. Summerhaven is accessed via the Catalina Highway from suburban northeast Tucson, and it is about 24.5 miles (39.4 km) from the base of the mountains to Summerhaven.

The Summerhaven area was originally used by the U.S. Army at Fort Lowell in Tucson as a military camp in its defense against the Apache people in the 1870s and 1880s. 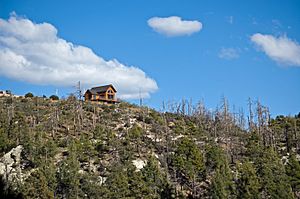 Summerhaven is located in the Santa Catalina Mountains and is surrounded by pine trees. According to the U.S. Census Bureau, the Summerhaven CDP has a total area of 4.6 sq mi (11.8 km2), almost all of which is land.

Due to its high elevation of 8,200 feet (2,500 m), Summerhaven experiences cool summers and cold winters. Yearly snowfall averages can be significant, on average reaching 65 inches (1,700 mm) a year. A windstorm hit Summerhaven in May 2010 and caused extensive damage to the forest around it. Some trails were severely damaged, although repair efforts were underway.

In 2010, the population of the Summerhaven census-designated place was 40. Note that this includes only people who were living in Summerhaven on the day of the census, thus excluding many part-time or seasonal residents. As of the 2010 census, the racial composition of Summerhaven was:

Summerhaven is a popular tourist destination. Several small shops in Summerhaven attract visitors, including the Mount Lemmon General Store and The Cookie Cabin, which offers homemade cookies and pizzas. In the winter, residents from lower elevations travel to Summerhaven, when the Catalina Highway is open, to enjoy the snow. Also during the summer, the same residents will frequent the area to get away from the heat. Because of the elevation difference between the Tucson area (5–6000 feet), the temperature in Summerhaven will be anywhere from 15-30 degrees F cooler depending on weather patterns, which usually makes it a very comfortable place to be compared to the hot desert heat in the summer time.

October 2010 saw the inaugural running of the Mount Lemmon Marathon, in which nearly 800 participants finished the race from near the start of the Catalina Highway up to Summerhaven.

The Mount Lemmon Ski Valley located outside Summerhaven is the southernmost ski location in the continental United States. 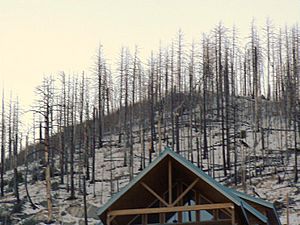 Burnt pine trees, snow, and a cabin among the stark landscape after the Aspen Fire in 2003

The Aspen wildfire struck Summerhaven in the summer of 2003, which resulted in the destruction of more than 250 of the 700 homes in the community. Arizona Governor Janet Napolitano assessed the damage, and both federal and county officials surveyed the extensive loss. In the months that followed, Tucson residents organized "Lemmon Aid" to help rebuild Summerhaven. Summerhaven continues to recover from the wildfire.

There is a general store and several food venues, but no gasoline or automotive services. The Mount Lemmon Fire Department maintains a station near Summerhaven, providing fire and EMS services.

All content from Kiddle encyclopedia articles (including the article images and facts) can be freely used under Attribution-ShareAlike license, unless stated otherwise. Cite this article:
Summerhaven, Arizona Facts for Kids. Kiddle Encyclopedia.