Mount Lemmon Ski Valley is a recreational ski area in the U.S. state of Arizona, and the southernmost ski destination in the continental United States. Mount Lemmon Ski Valley is located on the slopes of Mount Lemmon in the Santa Catalina Mountains just north of Tucson, Arizona. It is part of the Coronado National Forest, located near the mountaintop village of Summerhaven. The summit is 9,157 feet (2,791 m) above sea level, and receives approximately 180 inches (4.6 m) of snow annually.

Winter storms on Mount Lemmon are frequent, leaving untouched powder areas. The ski season on Mount Lemmon usually occurs between mid-December and April. The weather is usually mild enough to ski in a sweater and denim jeans, with temperatures ranging from 20 to 50 °F (−7 to 10 °C). There is no grooming at Mount Lemmon, which makes even the mild terrain challenging. Ski Valley is accessible via the Catalina Highway. Parking is limited at the ski area. The ski area is regularly closed some weekdays even when they have snow, but the specific days of closure vary. The highway is frequently closed for a day or so following substantial snowfalls until plows can clear the road. Restrictions limiting travel to vehicles with chains or four-wheel-drive above certain elevations may also be in effect during these times.

The "back" road to Mount Lemmon from the town of Oracle, Arizona, is dirt and is closed from December through March, and so provides no access during the ski season. 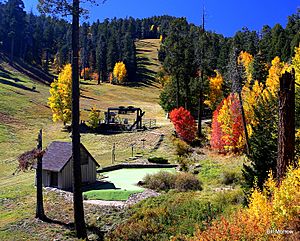 Ski lift during the non-ski season

The ski lift runs year round, as a "Sky Ride" experience in the summertime, offering views of the Ski Valley area, forest and grass-covered slopes, and the long distance vistas of the mountains and valleys in the distance north of the Santa Catalinas.

The Ski Valley is on United States Forest Service land, but is operated as a private concession by permit with the Forest Service.

All content from Kiddle encyclopedia articles (including the article images and facts) can be freely used under Attribution-ShareAlike license, unless stated otherwise. Cite this article:
Mount Lemmon Ski Valley Facts for Kids. Kiddle Encyclopedia.