Oracle is a census-designated place (CDP) in Pinal County, Arizona, United States. The population was 3,686 at the 2010 census.

Buffalo Bill Cody owned the High Jinks Gold Mine in Oracle briefly and, in 1911, appeared as "Santa" for a group of local children. The community is the location of the Biosphere 2 experiment. Oracle was also the postal address for environmentalist author Edward Abbey, who never lived in the town but visited often. Oracle is becoming a bedroom community for Tucson, Arizona, but large-scale development is opposed by many residents.

Oracle State Park is adjacent. The Arizona Trail passes through the Park and community. Oracle is the gateway to the road up the "back side" of Mount Lemmon, which starts off of American Avenue and currently offers a secondary route to the top. Prior to the construction of the Catalina Highway on the opposite side of the Santa Catalina range, the Oracle Control Road was the only road access to the mountain community of Summerhaven. The term "control road" derives from the fact that the direction of traffic was restricted to one-way only, either up or down at alternate times of day, to prevent motorists from having to pass one another on the narrow, steep road. This route is now popular mainly with off-road 4x4 drivers and with off-road or dual-purpose motorcyclists, and should not be attempted by regular passenger cars or street motorcycles. This road ends at the Catalina Highway near Loma Linda.

The name "Oracle" comes from early prospectors. Albert Weldon came to the area looking for gold and silver. He and some other companions named their first mine The Oracle after the ship Weldon had traveled on. The community was later named after its first mine, and thus, indirectly, after a ship.

The community began to grow in the late 1870s, as gold and silver were discovered, and the Christmas and New Year mines opened. By 1880, a post office had been established.

The community also became a retreat for people suffering from tuberculosis. The Acadia Ranch – built in Oracle in 1882 by Edwin S. and Lillian Dodge – was, during this time, a sanitorium.

Challenge To The Accepted History

On Jan. 1, 2017, in the Arizona Daily Star newspaper, historian David Leighton challenged the accepted history of the town of Oracle:

He wrote that Albert Weldon, who was born about 1840, in New Brunswick, Canada, traveled on his uncle Capt. A.D. Wood's ship Oracle around Cape Horn, at the tip of South America, and arrived in California between 1857 and 1860. Weldon enlisted as a private in Company E, 5th California Infantry, of the Union Army, in 1861. This unit was attached to the California Column and soon marched to Tucson, where Weldon was posted at a nearby stage station before moving east and eventually being honorably discharged in Mesilla, New Mexico in 1864.

After his military service, he returned to California and was involved in mining and also lumber but soon would return to Arizona in 1876. Within a couple years, he found a partner in Irishman Jimmie Lee and both men traveled northeast of Tucson, into the Santa Catalina Mountains in search of precious metal. Soon he found a mining claim and named it Oracle, in honor of his uncle's ship.

The ship Oracle was built under the supervision of Captain Charles E. Ranlett and was constructed for the shipbuilding firm Chapman & Flint of Maine. It was launched in 1853 and was a temperance ship (one that didn't allow alcohol aboard) and sailed to ports across the globe including Melbourne, Australia and Shanghai, China. It was captained by Weldon's uncle for several years.

Weldon was soon joined by Alexander McKay, an immigrant form Scotland who located two mining claims named Christmas and New Years because of the days they were discovered. McKay also built a one-room house, the first in the area, and from it, the village grew. When it was time for a post office to be named, Oracle was the name eventually chosen.

Mr. Leighton stated that the town of Oracle, takes its name from the Oracle Mine, which took its name from the ship Oracle, and that he believes the ship took its name from an oracle,--a shrine dedicated to a particular god where people went to consult a priest or priestess in times of trouble or uncertainty -- called the Temple of Apollo at Didyma in present-day Aydin Province, Turkey not the oracle at Delphi, Greece believed by some to be the origin of name. He also explained that there were two ships named Oracle made by the same shipbuilder, the second one being launched in 1876 but that this later ship wasn't the boat that Weldon traveled on, as has been said in some sources. 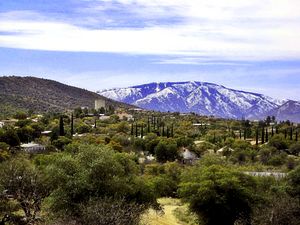 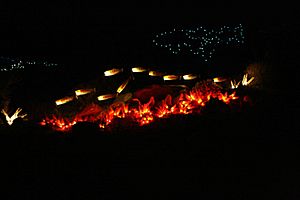 Oracle and the surrounding area sit largely on a slab of granite called "Oracle granite" that is visible as red or grey-and-white speckled "boulders" rising over the scrub and grass. It is mostly porphyritic biotite Precambrian granite with large microcline phenocrysts, and has occasional inclusions of white and milky quartz and pegmatite. The granite rarely contains ore and veins of gold or silver, and sometimes copper.

According to the United States Census Bureau, the CDP has a total area of 16.4 square miles (42 km2), all of it land. 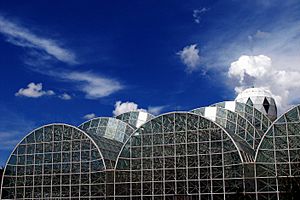 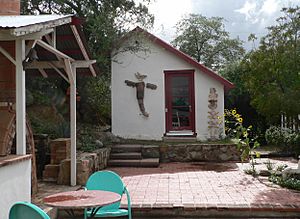 There were 1,384 households, out of which 31.5% had children under the age of 18 living with them, 57.0% were married couples living together, 10.4% had a female householder with no spouse present, and 27.4% were non-families. 23.4% of all households were made up of individuals, and 7.4% had someone living alone who was 65 years of age or older. The average household size was 2.6 and the average family size was 3.0.

All content from Kiddle encyclopedia articles (including the article images and facts) can be freely used under Attribution-ShareAlike license, unless stated otherwise. Cite this article:
Oracle, Arizona Facts for Kids. Kiddle Encyclopedia.