Quercus emoryi is an evergreen tree in the red oak group, retaining its leaves through the winter until the new leaves are produced in spring, and is a large shrub or small tree from 5–17 meters (16–56 ft) tall. The leaves are 3–6 cm (1–2.5 in) long, entire or wavy-toothed, leathery, dark green above, paler below. The acorns are 1.5–2 cm (0.59–0.79 in) long, blackish-brown, and mature in 6–8 months from pollination; the kernel is sweet, and is an important food for people and for certain other mammals. 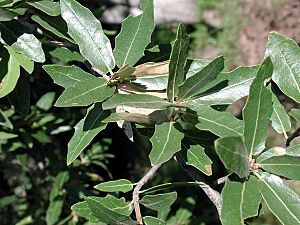 The seeds of this tree are called chich’il in Ndee, wi-yo:thi or toa in O’odham, bellotas in Spanish, and acorns in English. The English and Latin botanical names for this tree come from the name of a United States Army surveyor, Lieutenant William Hemsley Emory, who, in the 1840s, surveyed the area that had become known as west Texas.

The Emory acorn is sweet and is an important food for livestock, deer, squirrels, the Gila chipmunk, and birds such as quail and wild turkeys. Deer and livestock also browse the foliage.

Native Americans such as the Apaches eat Emory acorns traditionally, ceremonially, and in contemporary cuisine; these can be ground into meal and used in many ways.

Emory oak health and habitat have been challenged by colonization, and in 2020, none more so than at Oak Flat, Arizona in the Tonto National Forest. The Resolution Copper mining company is planning to clear-cut the best remaining old-growth Emory oak forest in the state at this location in preparation for a destructive copper mine. Although the area at Oak Flat is protected since President Eisenhower proclaimed that it should never be mined in the 1950s, the Resolution Copper company persuaded Arizona politicians to give this federal land to them to mine copper. The oak grove at Oak Flat can never be replaced. In other areas of the Southwest, Resolution Copper is currently trying to drum up some good PR by spending money on caretaking unrelated oaks to make up for the destruction of the oak forest at Oak Flat.

"As white settlers in the 19th and 20th centuries claimed and occupied Apache homeland, sacred groves were threatened. Cattle trampled young trees, and wildfire suppression made the forests grow unnaturally thick. Apache elders began to worry about the absence of new oak seedlings."

All content from Kiddle encyclopedia articles (including the article images and facts) can be freely used under Attribution-ShareAlike license, unless stated otherwise. Cite this article:
Emory oak Facts for Kids. Kiddle Encyclopedia.