The collared peccary (Pecari tajacu) is a species of mammal in the family Tayassuidae found in North, Central, and South America. They are commonly referred to as javelina, saíno, or báquiro, although these terms are also used to describe other species in the family. The species is also known as the musk hog. In Trinidad, it is colloquially known as quenk.

Although somewhat related to the pigs and frequently referred to as one, this species and the other peccaries are no longer classified in the pig family, Suidae. It has recently been placed in the Dicotyles, based on an unequivocal type-species selection; however, the IUCN still places it in the genus Pecari. 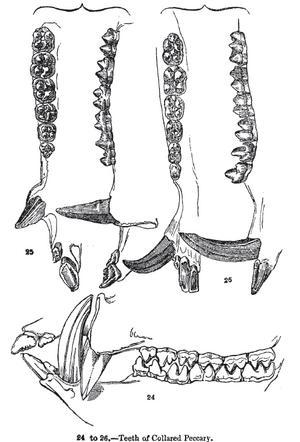 The collared peccary is widespread throughout much of the tropical and subtropical Americas, ranging from the Southwestern United States to northern Argentina in South America. They have been reintroduced to Uruguay in 2017, after 100 years of extirpation there. The only Caribbean island where it is native, however, is Trinidad. Until fairly recently, it was also present on the nearby island of Tobago, but is now exceedingly rare (if not extirpated) due to overhunting by humans. An adaptable species, it inhabits deserts, xeric shrublands, tropical and subtropical grasslands, savannas, shrublands, flooded grasslands and savannas, tropical and subtropical dry broadleaf forests, and several other habitats; it is also present in habitats shared by humans, merely requiring sufficient cover. Peccaries can be found in cities and agricultural land throughout their range, where they consume garden plants. Notable populations are known to exist in the suburbs of Phoenix and Tucson, Arizona.

Collared peccaries are classified as herbivores. They normally feed on cactus, mesquite beans, fruits, roots, tubers, palm nuts, other green vegetation. However, they will also eat lizards, dead birds, and rodents if the opportunity presents itself. In areas inhabited by humans, they also consume cultivated crops and ornamental plants, such as tulip bulbs.

The main predators of the collared peccary are cougars, Mexican wolves, coyotes, jaguars, and bobcats.

Collared peccaries are diurnal creatures that live in groups of up to 50 individuals, averaging between six and 9 members. They sleep in burrows, often under the roots of trees, but sometimes can be found in caves or under logs. However, collared peccaries are not completely diurnal. In central Arizona, they are often active at night, but less so in daytime.

Although they usually ignore humans, they will react if they feel threatened. They defend themselves with their tusks. A collared peccary can release a strong musk or give a sharp bark if it is alarmed.

They will also rub their scent on rocks and tree stumps to mark their territory, and rubbing the scent on each other to help with identification.

All content from Kiddle encyclopedia articles (including the article images and facts) can be freely used under Attribution-ShareAlike license, unless stated otherwise. Cite this article:
Collared peccary Facts for Kids. Kiddle Encyclopedia.