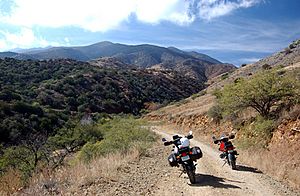 Unpaved road on the north or "backside" of Mount Lemmon

Mount Lemmon (O'odham: Babad Doʼag), with a summit elevation of 9,159 feet (2,792 m), is the highest point in the Santa Catalina Mountains. It is located in the Coronado National Forest north of Tucson, Arizona, United States. Mount Lemmon was named for botanist Sara Plummer Lemmon, who trekked to the top of the mountain with her husband and E. O. Stratton, a local rancher, by horse and foot in 1881. It is reported that Mount Lemmon Ski Valley, on the mountain's northeastern side, receives 200 inches (508 cm) of snow annually.

Summerhaven is a small town near the top of the mountain. It is a summer residence for many but there are some year round residents. There are many small cabins most of which were rebuilt after the Aspen Fire of July 2003.

The Catalina Highway, also called the Mount Lemmon Highway, as well as the Hitchcock Highway (after Frank Harris Hitchcock) runs up the Santa Catalina Mountains from the east side of Tucson up to Summerhaven, at the top of Mt. Lemmon. The beautiful, curving road is a favorite drive for tourists, for locals escaping summer's heat and cyclists, and has been recently designated as the Sky Island Parkway, part of the US National Scenic Byway system.

2010 saw the inaugural running of the Mount Lemmon Marathon.

The summit of the mountain is approximately twenty degrees cooler than the base. Therefore, large amounts of snow falls during the winter months, making it a cool escape and popular tourist attraction for Tucson and Phoenix habitants.

Catalina Highway charges tolls for parking, camping, and hiking. However, the tolls are only officially charged for people who are camping. Tolls for other events, such as hiking, parking, or grilling, are a part of the honor system. Park rangers will not check for toll payments unless someone is using the park campgrounds. Anyone wishing to sightsee or travel to Summerhaven are not subjected to paying tolls.

An unpaved road to the summit on the north side of Mount Lemmon starts in Oracle, which is on Arizona Route 77 north of Tucson. It offers a secondary route to the top. This route is popular with off-road 4x4 drivers and with off-road or dual-purpose motorcyclists. This road ends at the Catalina Highway near Loma Linda. Before the Catalina Highway was built it was the only route up the mountain.

All content from Kiddle encyclopedia articles (including the article images and facts) can be freely used under Attribution-ShareAlike license, unless stated otherwise. Cite this article:
Mount Lemmon Facts for Kids. Kiddle Encyclopedia.