Janet Ann Napolitano ( born November 29, 1957) is an American politician, lawyer, and university administrator who served as the 21st governor of Arizona from 2003 to 2009 and third United States Secretary of Homeland Security from 2009 to 2013, under President Barack Obama. She was named president of the University of California system in September 2013, and stepped down from that position on August 1, 2020 to join the faculty at Berkeley's Goldman School of Public Policy. She was elected to the American Philosophical Society in 2018. As of 2022, she remains the most recent Governor of Arizona from the Democratic Party.

Prior to her election as governor, she served as Attorney General of Arizona from 1999 to 2003. She was the first woman and the 23rd person to serve in that office. Napolitano had earlier served as the United States Attorney for the District of Arizona. She has been the first woman to serve in several offices, including Attorney General of Arizona, Secretary of Homeland Security, and president of the University of California.

Janet Napolitano was born on November 29, 1957, in New York City, the daughter of Jane Marie (née Winer) and Leonard Michael Napolitano, who was the dean of the University of New Mexico School of Medicine. Her father was of Italian descent and her mother had German and Austrian ancestry. Napolitano is a Methodist. She is the oldest of three children; she has a younger brother and sister. She was raised in Pittsburgh, Pennsylvania, and Albuquerque, New Mexico, where she graduated from Sandia High School in Albuquerque in 1975 and was voted Most Likely to Succeed. She graduated from Santa Clara University in Santa Clara, California, where she won a Truman Scholarship, and was valedictorian. In 1978, she studied for a term at the London School of Economics as part of Santa Clara's exchange programme through IES Abroad. She then received her Juris Doctor (J.D.) from the University of Virginia School of Law. After law school she served as a law clerk for Judge Mary M. Schroeder of the United States Court of Appeals for the Ninth Circuit, and then joined Schroeder's former firm, Lewis and Roca located in Phoenix.

In 1993, Napolitano was appointed by President Bill Clinton as United States Attorney for the District of Arizona. As U.S. Attorney, she was involved in the investigation of Michael Fortier of Kingman, Arizona, in connection with the Oklahoma City bombing. She ran for and won the position of Arizona Attorney General in 1998. During her tenure as attorney general, she focused on consumer protection issues and improving general law enforcement.

While still serving as attorney general, she spoke at the 2000 Democratic National Convention just three weeks after having a mastectomy. Napolitano recalls that the pain was so unbearable that she couldn't stand up. "Work and family helped me focus on other things while I battled the cancer," says Napolitano. "I am very grateful for all the support I had from family, friends and Arizonans." 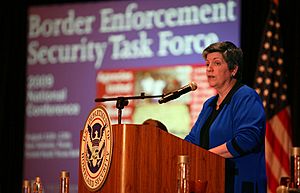 In February 2006, Napolitano was named by The White House Project as one of "8 in '08", a group of eight female politicians who could possibly run for president in 2008. On January 11, 2008, Napolitano endorsed then Illinois Senator Barack Obama as the Democratic nominee for president. On November 5, 2008, Napolitano was named to the advisory board of the Obama-Biden Transition Project. On December 1, 2008, Barack Obama introduced Napolitano as his nominee for United States Secretary of Homeland Security. On January 20, 2009, Napolitano was confirmed, becoming the first woman appointed Secretary in the relatively new department, and the fourth person to hold the position overall (including one acting secretary). Arizona Secretary of State Jan Brewer became the governor of Arizona, as the state does not have a lieutenant governor. 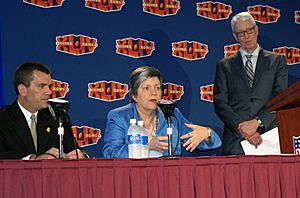 In March 2009, Napolitano told the German news site Der Spiegel that while she presumes there is always a threat from terrorism: "I referred to 'man-caused' disasters. That is perhaps only a nuance, but it demonstrates that we want to move away from the politics of fear toward a policy of being prepared for all risks that can occur." In April 2009, Napolitano, trying to defend her plans to tighten Canada–US border, claimed incorrectly that September 11 attack perpetrators entered the United States from Canada. Her comments provoked an angry response from the Canadian ambassador, media, and public.

In response to criticism, she later said, "Nonetheless, to the extent that terrorists have come into our country or suspected or known terrorists have entered our country across a border, it's been across the Canadian border. There are real issues there." Though there has only been one case, that of Ahmed Ressam an Algerian citizen who was in Canada illegally.

Napolitano is an avid basketball fan and regularly plays tennis and softball. Whitewater rafting and hiking are among her hobbies. She has hiked in Arizona's Superstition Mountains, New Mexico's Sandia Mountains, and the Himalayas, and has climbed Mount Kilimanjaro.

Napolitano has been undergoing cancer-related treatment since August 2016. On January 17, 2017, Napolitano was hospitalized in Oakland for complications from the cancer treatment. She was released from the hospital on January 23, 2017.

All content from Kiddle encyclopedia articles (including the article images and facts) can be freely used under Attribution-ShareAlike license, unless stated otherwise. Cite this article:
Janet Napolitano Facts for Kids. Kiddle Encyclopedia.