East Sahuarita is a census-designated place (CDP) in Pima County, Arizona, United States. The population was 1,419 at the 2000 census.

There were 472 households out of which 42.8% had children under the age of 18 living with them, 60.8% were married couples living together, 12.5% had a female householder with no husband present, and 20.3% were non-families. 15.0% of all households were made up of individuals and 4.7% had someone living alone who was 65 years of age or older. The average household size was 3.01 and the average family size was 3.35.

East Sahuarita is part of the broader town of Sahuarita.

The first known human inhabitants of the Sahuarita region were the Hohokam people, which may be the ancestors of the modern day Tohono O'odham Nation. The Hohokam were known for their highly innovative and extensive use of irrigation. The Hohokam were a very peaceful people, they had extensive trade routes extending to mesoamerica, and showed many cultural influences from their southern neighbors.

The Sobaipuri were possibly related to the Hohokam, and occupied the Southern portion of the Santa Cruz, with the Pima to their North and South. While Coronado passed just East of Sahuarita in 1521, it wasn't until Eusebio Kino's 1691 journey along the Santa Cruz River that he met the leaders of the Sobaipuri people. Kino was a true champion of the indigenous Indians, opposing forced labor in mines by Spanish overseers. Kino would later go on to found the Mission San Xavier del Bac in 1699, just north of Sahuarita. In 1775, Francisco Garcés would follow the same path, laying the groundwork for the founding of Tucson.

In 1775, after building a series of missions in the region, the Spanish established a fort in the Tucson region to control the Native American settlements nearby. This just north of Sahuarita, which effectively placed the region under Spanish control. Eventually a town came to be and was named Tucson. After the Mexican War of Independence in 1821, the region came under Mexican control until they sold the land to the United States as part of the Gadsden Purchase.

In 1854, following the Gadsden Purchase, Sahuarita would become a part of the Territory of New Mexico, in the United States of America. In the same year, Andrew B. Gray would travel the region on behalf of the Texas Western Railroad, in order to run a preliminary survey of the region. Meanwhile, the Native American peoples of the region were being pushed onto each other's land through American expansionism. In 1857, the Sobaipuri, who had acted as a buffer between the hostile Mexicans to the south and Apache to the north, finally collapsed under the pressure and vacated the area, generally moving westward to Papago territory. Sahuarita was a part of the Confederate Arizona Territory between 1861 and 1862 before being captured by the Union and incorporated into Arizona Territory in 1863. In 1867, Fort Crittenden was created between Sonoita and Patagonia in order to support the establishment of American settlements in the Santa Cruz Valley. In 1874, the San Xavier reservation was created, presently called the Tohono O'odham Reservation, and Native Americans were forcibly relocated to the reservation. 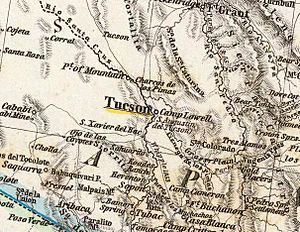 An 1870 map of Arizona shows an "Indian Village" just north of Sahuarita. The earliest known reference to the town can be found on a German map from 1875, which labels the town "Sahuarito". The first known US map to list the town came in 1879, by the US Department of Interior, calling the town "Saurita". The Saurita town name would continue to be found on successive maps of 1880 and 1890. Finally, a 1925 map of "Auto Trails" (e.g. roadways) of Arizona and New Mexico lists "Continental" instead of Sahuarita. The roadway at the time was an "improved road", one step inferior to a "paved road", laying the route to what today is called the Old Nogales Highway.

In 1879 Sahuarita Ranch was created by James Kilroy Brown. Brown choose the name Sahuarita due to the preponderance of saguaros in the area. The ranch was used as a staging area between Tucson, Arivaca, and Quijotoa. A small community developed in the area named Sahuarito, while the railroad laid tracks through the area (which remain to this day) and established a station and post office. Although originally surveyed by the Texas Western Railroad, the route would soon be run by the Southern Pacific Railroad up until the late 20th century. Brown sold his ranch in 1886 which caused the region to stagnate for three decades.

During this time, the hub of Sahuarita commerce was at the intersection of Sahuarita Road and Nogales Highway, in the form of the One Stop Market and Sahuarita Bar and Grill. These 130-year-old buildings remain intact, but they are scheduled to be demolished for a road expansion: "While some have said the 1 Stop and the shuttered Sahuarita Bar on the north side of Sahuarita Road were long-time fixtures that might deserve historic recognition, the longest-serving council member, Charles Oldham, and the council member who lives closest, Marty Moreno, both said the convenience store should make way for badly needed road improvements. Oldham said, “It’s in the way”." 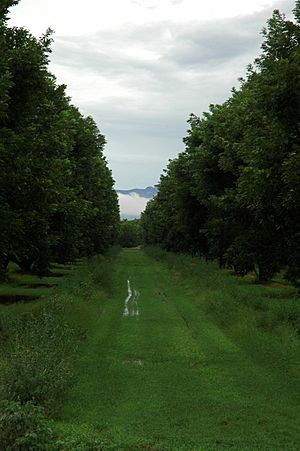 A view of the Pecan groves, with a glimpse of Santa Rita Mountains in the background, during the August monsoons (2007).

The Continental Farm of Sahuarita plays a central role in town history. In 1915, worried about the possibility of a German blockade of rubber imports, Bernard Baruch, Joseph Kennedy and J.P. Morgan founded the farm along the Santa Cruz River with hopes of growing guayule: plants that provide rubber. The project was abandoned after the end of World War I, and in 1922, was sold to Queen Wilhelmina of the Netherlands. The Queen rented the land to cotton farmers, in what would be the primary crop for the following four decades. In 1948, R. Keith Walden relocated the Farmers Investment Co. (FICO) from California to Arizona, buying the Continental Farm lands from the Queen. In 1965, over fears of a fall in demand for cotton resulting from the advent of synthetic fibers, Walden switched his crop to pecans. Today, the FICO pecan orchard is the largest in the world, with over 6,000 acres (24 km2) and 106,000 trees.

During World War II, Sahuarita was home to the Sahuarita Airstrip which was used to train bomber pilots for service in the war. Camp Continental, a labor camp for German prisoners of war was also located in Sahuarita. The location of the camp was around what is now Continental Ranch, West of the Nogales Highway and the Quail Crossing Boulevard intersection. It was established around November, 1944, as one of 21 "branch" POW camps established throughout the state. The population of 250 prisoners primarily worked in agriculture, tending to cotton and vegetable crops. More than one escape attempt was made by the Germans, all of which failed. 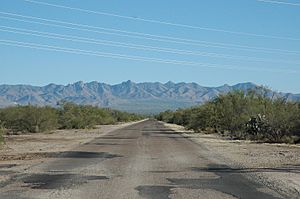 The former Sahuarita Airstrip, with the Santa Rita Mountains in the background (2007).

The Army Air Corp from Davis-Monthan Air Force Base first used this 27,046-acre (109.45 km2) range in April, 1942 for practice bombing runs. The Sahuarita Flight Strip was completed in 1943, with a 5,540-foot (1,690 m) paved runway, and the bombing runs ceased shortly thereafter. The site included 12 buildings in addition to the airstrip, and four observational towers. In 1950, bomber crews operating out of Carswell AFB, TX, restarted bombing runs on the range, which would last until 1962, with the airway strip remaining in use as an emergency landing strip thereafter. The Federal government soon released the land to the State of Arizona in 1978, who in turn leased the land to a cattle rancher. Presently, the former airstrip has been converted into a roadway that leads to "Sahuarita Park", while the remaining land remains in use for cattle grazing. The U.S. Army Corps of Engineers is continuing its longstanding efforts of identifying remaining munitions, preventing environmental contamination, and protecting several endangered species in the area, including jaguars, spotted owls, among others. Several different types of expended ammunition rounds can be found throughout the range, most of which found are 10 to 57 mm rounds. Shrapnel from the dropped ordnance also litters the range, as well as dozens of crushed olive drab ammunition boxes. Shell casings and magazine clips can also be found, along with JATO tanks and large crosses, constructed of wood with orange reflectors for visibility from the air. The crosses were used as targets for the airmen in training. Many United States Tobacco Company tins have been found, discarded by the several different aviators who occupied the area during its military days. The actual airstrip is now used as a road leading to Sahuarita Park and the Edge Charter School. Both of which were built among the remains of the older air force buildings.

Sahuarita contains the Titan Missile Museum, built in 1963 during the height of the Cold War, which is the only Titan Missile site in the world accessible to the public. The actual Titan II missile, the most powerful nuclear missile on standby in the US, remains in the silo for visitors to see. The Sahuarita Airstrip continued to be used by the U.S. Airforce throughout most of the Cold War.

In the desert southwest, water sustainability is a major concern. According to a 2007 report by Pima County, 76,000 acre feet (94,000,000 m3) of water was pumped from the aquifer in the Upper Santa Cruz Valley in 2006 [in the report referred to as the Green Valley area, which includes Sahuarita], with 85 percent of that water being used for mining and agriculture. The remaining 15 percent was split between water used for golf courses and residential/commercial water use. The report explains that "The Green Valley area does not have a sustainable water supply given current groundwater pumping rates... the water table in Green Valley has been declining in past years, and is expected to decline even faster as water demands [continue to increase]...". The report concludes that "Water supplies will become critical within the next ten years."

All content from Kiddle encyclopedia articles (including the article images and facts) can be freely used under Attribution-ShareAlike license, unless stated otherwise. Cite this article:
East Sahuarita, Arizona Facts for Kids. Kiddle Encyclopedia.