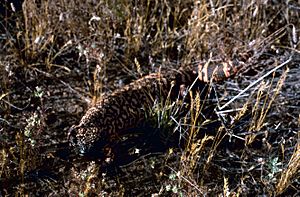 Sasabe (O'odham: Ṣaṣawk) is a small hamlet in the Altar Valley of southern Pima County, Arizona, United States, immediately north of the international border with Mexico. It hosts a minor border crossing, an adobe sales outlet, a public school, a guest ranch, a general store with fuel pumps, a weekend bar, and a post office serving the ZIP Code of 85633. In 2010, the population of the 85633 ZCTA, including Sasabe, was 54.

A post office called Sasabe has been in operation since 1905. Sasabe is a name derived from a Native American language (Tohono O'odham, formerly Papago) meaning "head valley".

Much of the area north and east of Sasabe is within the Buenos Aires National Wildlife Refuge. In 2006, 3,500 acres (14 km2) of the refuge that border Mexico east of Sasabe were closed to public entry due to problems with smugglers and unauthorized border crossings.

All content from Kiddle encyclopedia articles (including the article images and facts) can be freely used under Attribution-ShareAlike license, unless stated otherwise. Cite this article:
Sasabe, Arizona Facts for Kids. Kiddle Encyclopedia.