Kids Encyclopedia Facts
This page is about the building material. For the software company, see Adobe Systems. 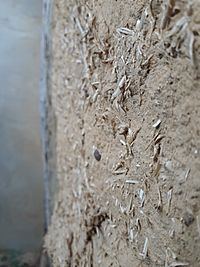 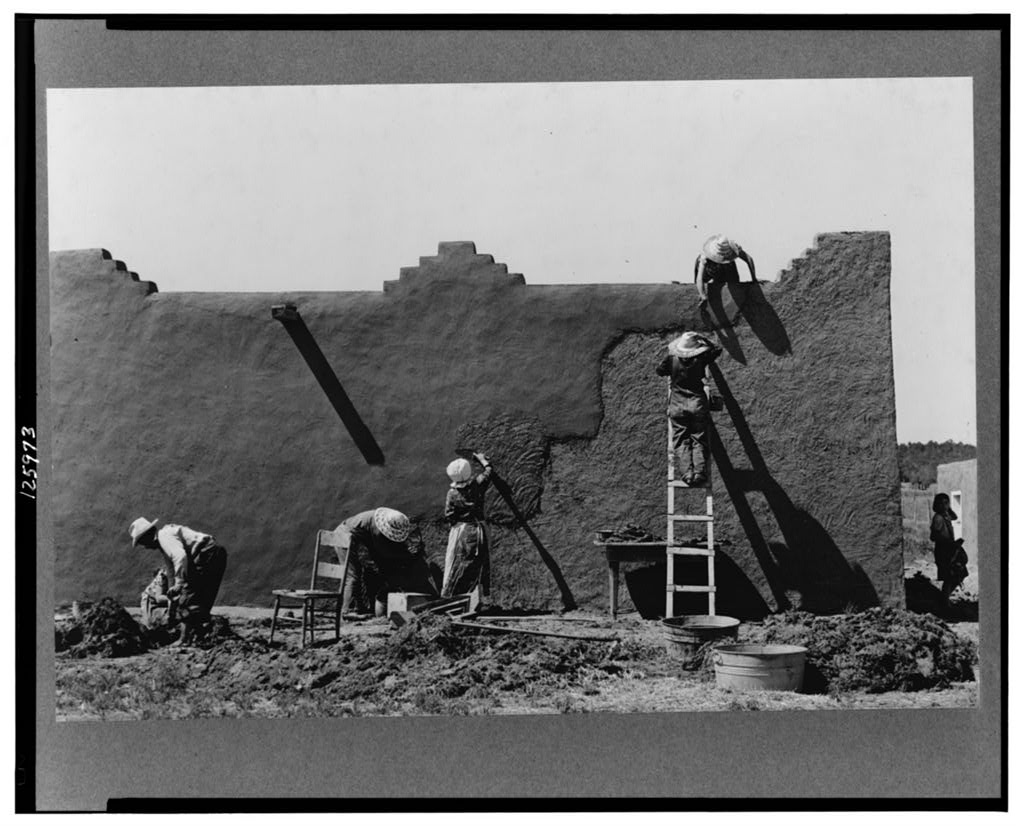 Renewal of the surface coating of an adobe wall in Chamisal, New Mexico 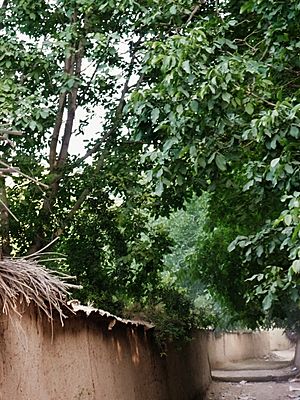 Shiraz, Iran. Its urban gardens are separated by adobe walls.

Adobe is a building material made from earth and organic materials. Adobe is Spanish for mudbrick, but in some English-speaking regions of Spanish heritage, the term is used to refer to any kind of earth construction. Most adobe buildings are similar in appearance to cob and rammed earth buildings. Adobe is among the earliest building materials, and is used throughout the world.

Adobe bricks are rectangular prisms small enough that they can quickly air dry individually without cracking. They can be subsequently assembled, with the application of adobe mud to bond the individual bricks into a structure. There is no standard size, with substantial variations over the years and in different regions. In some areas a popular size measured 8" inches x 4" inches x 12" inches weighing about 25 pounds; in other contexts the size is 10" x 4" x 14" weighing about 35 pounds. The maximum sizes can reach up to 100 pound; above this weight it becomes difficult to move the pieces, and it is preferred to ram the mud in situ, resulting in a different typology known as rammed earth.

In dry climates, adobe structures are extremely durable, and account for some of the oldest existing buildings in the world. Adobe buildings offer significant advantages due to their greater thermal mass, but they are known to be particularly susceptible to earthquake damage if they are not somehow reinforced. Cases where adobe structures were widely damaged during earthquakes include the 1976 Guatemala earthquake, the 2003 Bam earthquake, and the 2010 Chile earthquake.

Buildings made of sun-dried earth are common throughout the world (Middle East, Western Asia, North Africa, West Africa, South America, southwestern North America, Spain, and Eastern Europe.) Adobe had been in use by indigenous peoples of the Americas in the Southwestern United States, Mesoamerica, and the Andes for several thousand years. Puebloan peoples built their adobe structures with handsful or basketsful of adobe, until the Spanish introduced them to making bricks. Adobe bricks were used in Spain from the Late Bronze and Iron Ages (eighth century BCE onwards). Its wide use can be attributed to its simplicity of design and manufacture, and economics.

A distinction is sometimes made between the smaller adobes, which are about the size of ordinary baked bricks, and the larger adobines, some of which may be one to two yards (1–2 m) long. 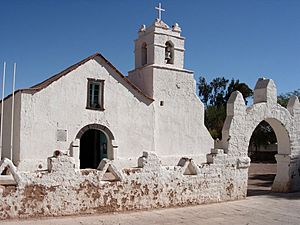 The word adobe has existed for around 4000 years with relatively little change in either pronunciation or meaning. The word can be traced from the Middle Egyptian (c. 2000 BC) word ɟbt "mudbrick." Middle Egyptian evolved into Late Egyptian, Demotic or "pre-Coptic", and finally to Coptic (c. 600 BC), where it appeared as τωωβε. This was adopted into Arabic as الطوب aṭ-ṭawbu or aṭ-ṭūbu, with the definite article al- attached. tuba, This was assimilated into the Old Spanish language as adobe probably via Mozarabic. English borrowed the word from Spanish in the early 18th century, still referring to mudbrick construction. 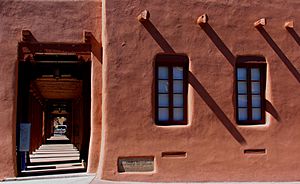 In more modern English usage, the term "adobe" has come to include a style of architecture popular in the desert climates of North America, especially in New Mexico, regardless of the construction method.

An adobe brick is a composite material made of earth mixed with water and an organic material such as straw or dung. The soil composition typically contains sand, silt and clay. Straw is useful in binding the brick together and allowing the brick to dry evenly, thereby preventing cracking due to uneven shrinkage rates through the brick. Dung offers the same advantage. The most desirable soil texture for producing the mud of adobe is 15% clay, 10–30% silt, and 55–75% fine sand. Another source quotes 15–25% clay and the remainder sand and coarser particles up to cobbles 50 to 250 mm (2 to 10 in), with no deleterious effect. Modern adobe is stabilized with either emulsified asphalt or Portland cement up to 10% by weight.

No more than half the clay content should be expansive clays, with the remainder non-expansive illite or kaolinite. Too much expansive clay results in uneven drying through the brick, resulting in cracking, while too much kaolinite will make a weak brick. Typically the soils of the Southwest United States, where such construction has been widely used, are an adequate composition. 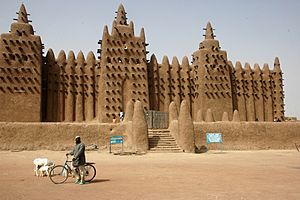 The Great Mosque of Djenné, Mali, is built in adobe. The struts projecting from the wall serve as decoration, as well as supports for scaffolding during maintenance

Adobe walls are load bearing, i.e. they carry their own weight into the foundation rather than by another structure, hence the adobe must have sufficient compressive strength.

In addition to being an inexpensive material with a small resource cost, adobe can serve as a significant heat reservoir due to the thermal properties inherent in the massive walls typical in adobe construction. In climates typified by hot days and cool nights, the high thermal mass of adobe mediates the high and low temperatures of the day, moderating the temperature of the living space. 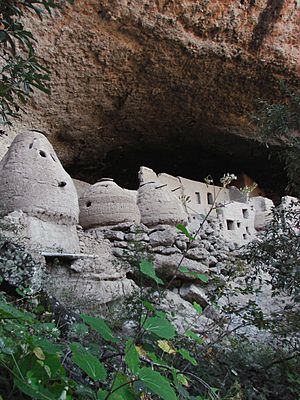 Cliff dwellings of poured or puddled adobe (cob) at Cuarenta Casas in Mexico.

Poured and puddled adobe (puddled clay, piled earth), today called cob, is made by placing soft adobe in layers, rather than by making individual dried bricks or using a form. "Puddle" is a general term for a clay or clay and sand-based material worked into a dense, plastic state. These are the oldest methods of building with adobe in the Americas until holes in the ground were used as forms, and later wooden forms used to make individual bricks were introduced by the Spanish. 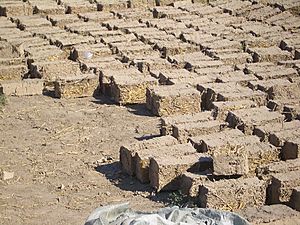 Adobe bricks near a construction site in Milyanfan, Kyrgyzstan

Bricks made from adobe are usually made by pressing the mud mixture into an open timber frame. In North America, the brick is typically about 25 by 36 cm (10 by 14 in) in size. The mixture is molded into the frame, which is removed after initial setting. After drying for a few hours, the bricks are turned on edge to finish drying. Slow drying in shade reduces cracking.

The same mixture, without straw, is used to make mortar and often plaster on interior and exterior walls. Some cultures used lime-based cement for the plaster to protect against rain damage.

Depending on the form into which the mixture is pressed, adobe can encompass nearly any shape or size, provided drying is even and the mixture includes reinforcement for larger bricks. Reinforcement can include manure, straw, cement, rebar or wooden posts. Experience has shown straw, cement, or manure added to a standard adobe mixture can all produce a stronger, more crack-resistant brick. A test is done on the soil content first. To do so, a sample of the soil is mixed into a clear container with some water, creating an almost completely saturated liquid. The container is shaken vigorously for one minute. It is then allowed to settle for a day until the soil has settled into layers. Heavier particles settle out first, sand above, silt above that and very fine clay and organic matter will stay in suspension for days. After the water has cleared, percentages of the various particles can be determined. Fifty to 60 percent sand and 35 to 40 percent clay will yield strong bricks. The Cooperative State Research, Education, and Extension Service at New Mexico State University recommends a mix of not more than 1/3 clay, not less than 1/2 sand, and never more than 1/3 silt. 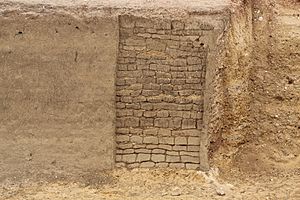 The ground supporting an adobe structure should be compressed, as the weight of adobe wall is significant and foundation settling may cause cracking of the wall. To protect the interior and exterior adobe walls, finishes such as mud plaster, whitewash or stucco can be applied. These protect the adobe wall from water damage, but need to be reapplied periodically. Alternatively, the walls can be finished with other nontraditional plasters that provide longer protection. Bricks made with stabilized adobe generally do not need protection of plasters.

The traditional adobe roof has been constructed using a mixture of soil/clay, water, sand and organic materials. The mixture was then formed and pressed into wood forms, producing rows of dried earth bricks that would then be laid across a support structure of wood and plastered into place with more adobe.

Depending on the materials available, a roof may be assembled using wood or metal beams to create a framework to begin layering adobe bricks. Depending on the thickness of the adobe bricks, the framework has been preformed using a steel framing and a layering of a metal fencing or wiring over the framework to allow an even load as masses of adobe are spread across the metal fencing like cob and allowed to air dry accordingly. This method was demonstrated with an adobe blend heavily impregnated with cement to allow even drying and prevent cracking.

The more traditional flat adobe roofs are functional only in dry climates that are not exposed to snow loads. The heaviest wooden beams, called vigas, lie atop the wall. Across the vigas lie smaller members called latillas and upon those brush is then laid. Finally, the adobe layer is applied.

To construct a flat adobe roof, beams of wood were laid to span the building, the ends of which were attached to the tops of the walls. Once the vigas, latillas and brush are laid, adobe bricks are placed. An adobe roof is often laid with bricks slightly larger in width to ensure a greater expanse is covered when placing the bricks onto the roof. Following each individual brick should be a layer of adobe mortar, recommended to be at least 25 mm (1 in) thick to make certain there is ample strength between the brick's edges and also to provide a relative moisture barrier during rain.

Roof design evolved around 1850 in the American Southwest. Three inches of adobe mud was applied on top of the latillas, then 18 inches of dry adobe dirt applied to the roof. The dirt was contoured into a low slope to a downspout aka a 'canal'. When moisture was applied to the roof the clay particles expanded to create a waterproof membrane. Once a year it was necessary to pull the weeds from the roof and reslope the dirt as needed.

Depending on the materials, adobe roofs can be inherently fire-proof. The construction of a chimney can greatly influence the construction of the roof supports, creating an extra need for care in choosing the materials. The builders can make an adobe chimney by stacking simple adobe bricks in a similar fashion as the surrounding walls.

Adobe around the world

The largest structure ever made from adobe is the Arg-é Bam built by the Achaemenid Empire. Other large adobe structures are the Huaca del Sol in Peru, with 100 million signed bricks and the ciudellas of Chan Chan and Tambo Colorado, both in Peru.

The citadel of Bam, Iran, or Arg-é Bam, in Kerman Province, Iran: The world's largest adobe structure, dating to at least 500 BC

All content from Kiddle encyclopedia articles (including the article images and facts) can be freely used under Attribution-ShareAlike license, unless stated otherwise. Cite this article:
Adobe Facts for Kids. Kiddle Encyclopedia.