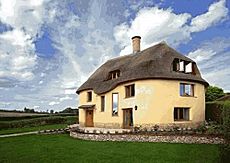 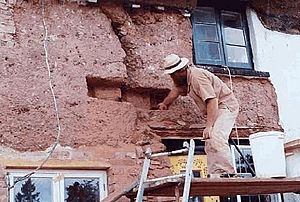 Cob, or clom in Wales, is a natural building material.

Cob is made from "subsoil" (soil below the top layer), water, some kind of fibrous organic material (usually straw), and sometimes lime. The contents of subsoil varies and if it does not contain the right mixture is can be modified with sand or clay. Cob is fireproof, resists seismic activity, and inexpensive. It can be used to create artistic, sculptural forms and has been revived in recent years by the natural building and sustainability movements.

The material has a long life-span even in rainy climates, provided a tall foundation and large roof overhang are present.

All content from Kiddle encyclopedia articles (including the article images and facts) can be freely used under Attribution-ShareAlike license, unless stated otherwise. Cite this article:
Cob (material) Facts for Kids. Kiddle Encyclopedia.