Shiraz is the fifth-most-populous city of Iran and the capital of Fars Province (Old Persian as Pars). At the 2016 census, the population of the city was 1,869,001 and its built-up area with "Shahr-e Jadid-e Sadra" (Sadra New Town) was home to 1,565,572 inhabitants. Shiraz is located in the southwest of Iran on the "Rudkhaneye Khoshk" (The Dry River) seasonal river. It has a moderate climate and has been a regional trade center for over a thousand years. Shiraz is one of the oldest cities of ancient Persia.

The earliest reference to the city, as Tiraziš, is on Elamite clay tablets dated to 2000 BC. The modern city was founded or restored by the Umayyads in 693 and grew prominent under the successive Iranian Saffarid and Buyid dynasties in the 9th and 10th–11th centuries, respectively. In the 13th century, Shiraz became a leading center of the arts and letters, due to the encouragement of its ruler and the presence of many Persian scholars and artists. It was the capital of Persia during the Zand dynasty from 1750 until 1800. Two famous poets of Iran, Hafez and Saadi, are from Shiraz, whose tombs are on the north side of the current city boundaries.

Shiraz is known as the city of poets, literature, wine (despite Iran being an Islamic republic since 1979), and flowers. It is also considered by many Iranians to be the city of gardens, due to the many gardens and fruit trees that can be seen in the city, for example Eram Garden. Shiraz has had major Jewish and Christian communities. The crafts of Shiraz consist of inlaid mosaic work of triangular design; silver-ware; pile carpet-weaving and weaving of kilim, called gilim and jajim in the villages and among the tribes. In Shiraz industries such as cement production, sugar, fertilizers, textile products, wood products, metalwork and rugs dominate. Shirāz also has a major oil refinery and is also a major center for Iran's electronic industries: 53% of Iran's electronic investment has been centered in Shiraz. Shiraz is home to Iran's first solar power plant. Recently the city's first wind turbine has been installed above Babakuhi mountain near the city. 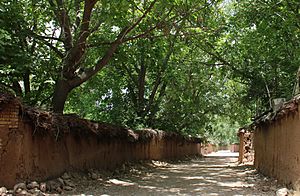 Shiraz Garden Drives, north part of the city is full of gardens. they formed before the expansion of Shiraz

Shiraz is located in the south of Iran and the northwest of Kerman Province. It is built in a green plain at the foot of the Zagros Mountains 1,500 metres (4,900 feet) above sea level. Shiraz is 800 kilometres (500 mi) south of Tehran.

A seasonal river, Dry River, flows through the northern part of the city and on into Maharloo Lake. As of 1920, the area had a large forest of oak trees.

During the Zand dynasty when Shiraz was the capital of Iran, it was a small village limited around the Arg of Karim Khan and naturally, there were several villages near it. The north part of old Shiraz (now Qasr Dasht and Chamran) was completely covered with gardens and green trees that still remain. A number of municipal laws prohibit construction in any of the garden areas. In another view, these gardens are the city's lungs and help to clean the dust, and haze or carbon dioxide that cars produce, by photosynthesis. On the other hand, we see Shiraz as being more likely to have clean air in Iran; this is when it is compared to big cities such as Tehran or Isfahan, and the reason behind it may lie in Shiraz's many gardens. 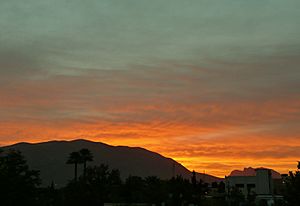 Sunset in Shiraz, with Mount Derak in the background

Shiraz contains a considerable number of gardens. Due to population growth in the city, many of these gardens may be lost to give way to new developments. Although some measures have been taken by the Municipality to preserve these gardens, many illegal developments still endanger them.

Despite being in a relatively dry climate, extreme weather is not a rare occasion. Most recently, in March, 25th, 2019, flash floods from heavy rains has resulted in 19 deaths and 200+ injuries. 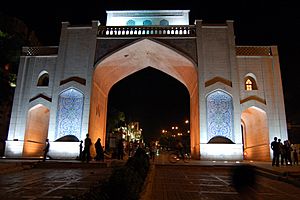 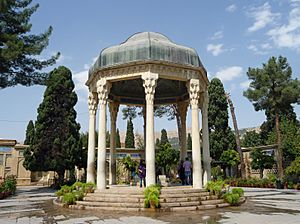 Shiraz is the economic center of southern Iran. The second half of the 19th century witnessed certain economic developments that greatly changed the economy of Shiraz. The opening of the Suez Canal in 1869 allowed the extensive import into southern Iran of inexpensive European factory-made goods, either directly from Europe or via India. Farmers in unprecedented numbers began planting cash crops such as opium poppy, tobacco, and cotton. Many of these export crops passed through Shiraz on their way to the Persian Gulf. Iranian long-distance merchants from Fars developed marketing networks for these commodities, establishing trading houses in Bombay, Calcutta, Port Said, Istanbul and even Hong Kong.

Shiraz's economic base is in its provincial products, which include grapes, citrus fruits, cotton and rice. Industries such as cement production, sugar, fertilizers, textile products, wood products, metalwork and rugs dominate. Shirāz also has a major oil refinery and is also a major center for Iran's electronic industries. 53% of Iran's electronic investment has been centered in Shiraz. Agriculture has always been a major part of the economy in and around Shiraz. This is partially due to a relative abundance of water compared to the surrounding deserts. Shirāz is famous for its carpet production and flowers as well. Viticulture has a long history in the region, and Shirazi wine used to be produced here. Shiraz is also an Iranian center for IT, communication, electronic industry, and transportation.

The Shiraz Special Economic Zone or the SEEZ was established in 2000 with the purpose of boosting manufacturing in electronics and communications. 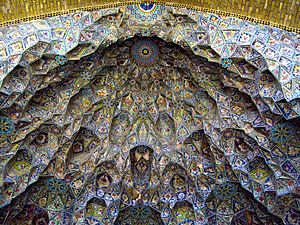 With more than 25 malls and 10 bazaars, Shiraz is known as the easiest place for shopping in Iran and the Middle East.

The Persian Gulf Complex, located at the north end of the city, is the largest mall in the world in terms of the number of shops.

The Vakil Bazaar, one of the oldest bazaars in the world, is located in the old city centre of Shiraz. Featuring courtyards, caravansarais, and bath houses, its shops sell different types of spices, Persian rugs, copper handicrafts and antiques.

The city is one of the key tourism sites in Iran, its cultural heritage is of global importance.

All content from Kiddle encyclopedia articles (including the article images and facts) can be freely used under Attribution-ShareAlike license, unless stated otherwise. Cite this article:
Shiraz Facts for Kids. Kiddle Encyclopedia.