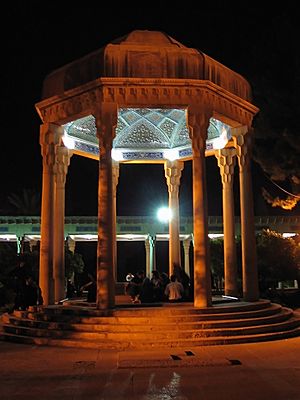 Khwajeh Shams al-Din Muhammad Hafez-e Shirazi (also spelled Hafiz) (born between 1310 and 1337, believed to have died at age 69) (Persian: خواجه شمس الدین محمد حافظ شیرازی) or Hafez is a Persian poet. Hafez was born in Shiraz, Iran. Hafez learnt the Quran by heart at an early age. His poems are collected in Divan e Hafez. William Jones translated his work into English in 1771. 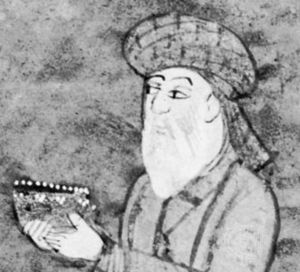 Hafez, detail of an illumination in a Persian manuscript of the Divan of Hafez, 18th century

Despite his profound effect on Persian life and culture and his enduring popularity and influence, few details of his life are known, and particularly about his early life there is a great deal of more or less mythical anecdote. Some of the early tazkeras (biographical sketches) mentioning Hafez are generally considered unreliable. One early document discussing Hafez' life is the preface of his Divān, which was written by an unknown contemporary of Hafez whose name may have been Moḥammad Golandām. The generally accepted modern edition of Hafez's Divān is known as Qazvini-Ḡani, edited by Moḥammad Qazvini and Qāsem Ḡani.

[[File:Tomb of Hafez, the poet, in Shiraz , Iran.jpg|thumb|right|The tomb of Hafez in his mausoleum in Shiraz]] Many semi-miraculous mythical tales were woven around Hāfez after his death. Four of them are:

All content from Kiddle encyclopedia articles (including the article images and facts) can be freely used under Attribution-ShareAlike license, unless stated otherwise. Cite this article:
Hafez Facts for Kids. Kiddle Encyclopedia.