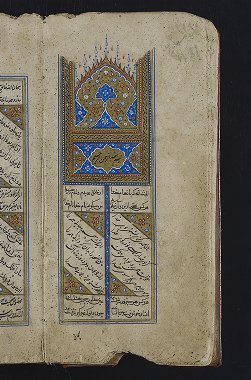 The ghazal is a poetic form that has rhyming couplets and a refrain, with each line sharing the same meter. A ghazal talks about both the pain of loss and the beauty of love in spite of that pain. The form is ancient. It started in 6th century Arabic verse. It comes from the Arabian panegyric qasida. The structure of the ghazal are similar in strictness to those of the Petrarchan sonnet. In its style and content it is a genre with a lot of variety of expression around its central themes of love and separation. It is one of the main poetic forms the Indo-Perso-Arabic civilization gave to the eastern Islamic world.

The ghazal spread into South Asia in the 12th century. This was because of the influence of Sufi mystics and the courts of the new Islamic Sultanate. Although the ghazal is mostly a form of Dari poetry and Urdu poetry, today it is found in the poetry of many languages of the Indian sub-continent.

It is common in ghazals for the poet's name to be in the last verse. This is known as takhallus.

All content from Kiddle encyclopedia articles (including the article images and facts) can be freely used under Attribution-ShareAlike license, unless stated otherwise. Cite this article:
Ghazal Facts for Kids. Kiddle Encyclopedia.