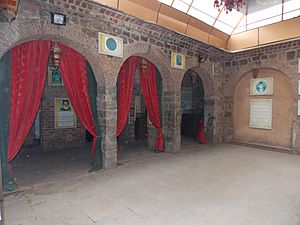 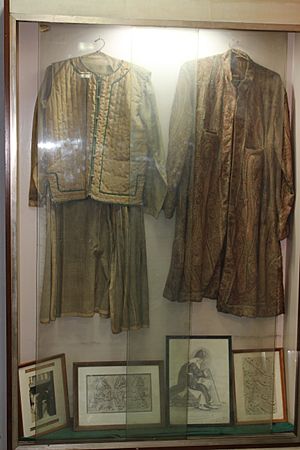 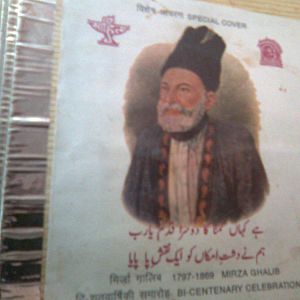 A special commemorative cover of Ghalib released in India.

Dabeer-ul-Mulk, Najm-ud-daulah Mirza Asadullah Beg Khan (Urdu: /Persian: مرزا اسد اللہ بیگ خان), pen-name Ghalib (Urdu: /Persian: غالب, ġhālib means dominant) and (former pen-name) Asad (Urdu: /Persian: اسد}, asad means lion) (27 December 1796 — 15 February 1869), was a great classical Urdu and Persian poet of the Indian subcontinent. Most notably, he wrote several ghazals during his life, which have since been interpreted and sung in many different ways by different people. He is considered to be the most popular and influential poet of the Urdu language.

He was born in 1796 in Akbarabad (present Agra). His father Abdullah Beg Khan and uncle Nasrullah Beg Khan were in the Army. Mirza Ghalib become orphaned when he was just 5 years old. He lived with his uncle for 4 years, when his uncle too died.

He started saying sher in Agra itself. He married the daughter of Nawab Ilahi Baksh 'Maaroof' and therefore moved to Delhi. In Delhi he devoted his full concentration to poetry. Soon he mastered the Persian language. So that no one should call him be-ustad ( without a teacher) he fabricated a story that he had an Iranian teacher Abdul Samad live in house for two years to teach him Farsi. Ghalib was always proud of his Farsi poetry but he is known more by his Urdu prose and poetry.

He always lived his life lacking money. After 1857 the support from the Royal durbar stopped. The pension from the British Government was stopped because he was suspected of supporting the rebels. He even traveled to Calcutta to restart the pension but to no avail. He went to the Nawab of Rampur, who promised him Rupees 200 if he lived in Rampur and Rs. 100 if he lived anywhere else. His pension was resumed 3 years after that, but all that money was used up for paying old debts. Ghalib died in 1869.

Not only Urdu poetry but the prose is also indebted to Mirza Ghalib. His letters gave foundation to the easy and popular Urdu. Before Ghalib, letter writing in Urdu was highly ornamental. He made his letters "talking" by using words and sentences as if he is talking to the reader. According to him "sau kos say ba-zabaan-e-qalam baateiN kiya karo aur hijr meiN visaal kay ma-zay liya karo" [ from hundred of miles talk with the tongue of the pen and enjoy the joy of meeting even when you are separated] His letters were very informal, some times he will just write the name of the person and start the letter. He himself was very humorous and also made his letter very interesting. He said "maiN koshish karta hooN keH koi aisi baat likhooN jo pa-Rhay kHoosh ho jaaye" [ I want to write the lines that whoever reads those should enjoy it] When the third wife of one of his friends died, he wrote... "Allah allah aik woH log haiN jo teen teen dafaH iss qaid say chhooT chu-kaiN haiN aur aik hum haiN keH aik ag-lay pachas baras say jo phaNsi ka phaNda ga-lay meiN paRha hai to naH phaNda hi TuT-ta hai naH dum hi nikalta hai" [Allah Allah, there are some among us who have been freed from the prison three times and I have for the past 50 years this rope around my neck neither this rope breaks nor it takes my life] Some scholars says that Ghalib would have the same place in Urdu literature even only on the basis of his letters.

In Urdu ghazals, along with the love and beauty Ghalib added all the facets of life. Because of him the canvas of Urdu ghazal became very extended.

Since Ghalib was very occupied with Persian, his earlier shers used difficult words and his flights of imagination was such that...

[either you (Ghalib) understand or the God understand]

Ghalib was not a philosopher but he questioned things around him.

[when there is no one besides you; then oh God why is this pandemonium]

One also find naughtiness in his writings, he makes fun of every thing and everybody including himself.

But Ghalib's sher not only have immediate effect on the heart but it makes you think too.

Ghalib was commemorated on his 220th birth anniversary by Search Engine Google which showed a special doodle on its Indian home page for him on 27 December 2017.

All content from Kiddle encyclopedia articles (including the article images and facts) can be freely used under Attribution-ShareAlike license, unless stated otherwise. Cite this article:
Mirza Ghalib Facts for Kids. Kiddle Encyclopedia.