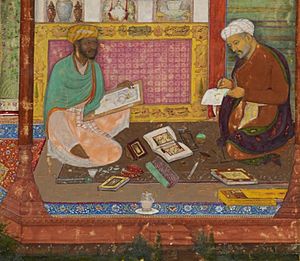 Diwan is a collection of poems. These poems were often written and collected in the royal courts of various sultanates. They were very well known for their ability to inspire.

All content from Kiddle encyclopedia articles (including the article images and facts) can be freely used under Attribution-ShareAlike license, unless stated otherwise. Cite this article:
Diwan (poetry) Facts for Kids. Kiddle Encyclopedia.