Nowruz (Persian: نوروز, meaning "[The] New Day" Kurdish: Newroz; Turkish: Nevruz) it is what the Iranians call their New Year. It is one of the ancient celebrations which has survived throughout history and is considered to be a day in which new good things start. 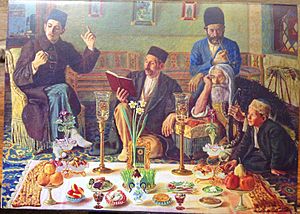 Nowruz is the day of the spring equinox, when the amount of light and dark is the same during the day. It is the beginning of the year in the Persian calendar. It is usually celebrated on March 21.

Nowruz has been celebrated by people from different ethnic communities and religious backgrounds for thousands of years. It started in Persia in one of the capitals of the Achaemenid Empire in Persis (Fars).

Khurdish and in Middle East and many other countries in Central Asia including Iran, Tajikistan, Pakistan and Afghanistan celebrate this event on 21 - 22 March. It is considered to be one of the most important celebrations of Persians.

All content from Kiddle encyclopedia articles (including the article images and facts) can be freely used under Attribution-ShareAlike license, unless stated otherwise. Cite this article:
Nowruz Facts for Kids. Kiddle Encyclopedia.