The pentagram used as a symbol for Bábism. It was made by the Báb. 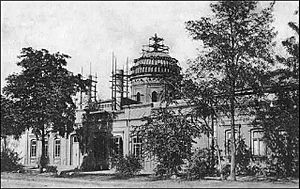 Shrine of Bab in Ashgabat

Bábism is a religion. It was started in Persia in the middle of the 19th century. The founder was Mirza Ali Muhamed Reza ash-Shirazi. He claimed to be a kind of savior for Shi'a Muslims. He took the title Báb (Persian: الباب), meaning "gate". Bábism was originally based on his interpretation of the Qur'an and other Islamic texts. There were similar movements like this, but the Bábí movement tried to break with Islam to start a new religion. It was opposed by the government in Persia, which used laws and violence to destroy it. Bábism continued in exile in the Ottoman Empire. It led to the creation of Azali Babism and the Bahá'í Faith.

All content from Kiddle encyclopedia articles (including the article images and facts) can be freely used under Attribution-ShareAlike license, unless stated otherwise. Cite this article:
Bábism Facts for Kids. Kiddle Encyclopedia.