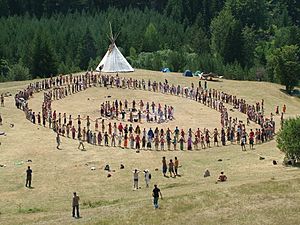 New religious movement is a term that is used for certain religious communities. Such communities are usually small, compared to world religions. Very often, they do not have a long history. In most cases, the following will be true:

Other names for such movements include sect and cult. They are problematic though, because they have a negative connotation. Examples for movements that have been called cults are Scientology, Transcendental Meditation, Unification Church, Family International also called Children of God, Branch Davidians, Heaven's Gate and Wicca.

All content from Kiddle encyclopedia articles (including the article images and facts) can be freely used under Attribution-ShareAlike license, unless stated otherwise. Cite this article:
New religious movement Facts for Kids. Kiddle Encyclopedia.