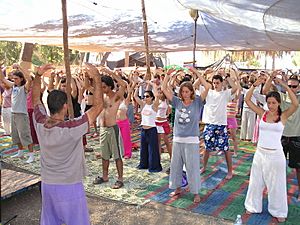 Falun Gong (also known as Falun Dafa) is a spiritual discipline from China with exercises similar to Tai chi chuan. It was founded by Li Hongzhi in 1992. People who follow Falun Gong do five exercises and read books written by Li Hongzhi, the movement's founder. They believe in "Truthfulness, Compassion and Forbearance", and they also believe that the Falun Gong exercises can make them healthy, and make them better people. In 1999, after a big Falun Gong gathering in front of a Chinese government building, the Communist Party of China said: people cannot practice Falun Gong, it is "illegal".

Reporter Ethan Gutmann said about 65,000 Falun Gong people were killed for their body parts from 2000 to 2008.

All content from Kiddle encyclopedia articles (including the article images and facts) can be freely used under Attribution-ShareAlike license, unless stated otherwise. Cite this article:
Falun Gong Facts for Kids. Kiddle Encyclopedia.