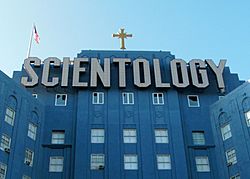 Scientology is a movement based on a system of beliefs. These beliefs are based on written words by L. Ron Hubbard. A few other people have added, but almost all of it is his. He started it in 1954. Hubbard contributed until his death in 1986.

Different people understand the words Hubbard wrote differently. In some countries, there are Churches of Scientology. A few countries - such as Germany, France, Belgium, Italy, Greece, and the Netherlands - are suspicious of the Church. They feel that it is a cult, and a business to make money. Scientology has been controversial since it began.

Scientology teaches that people are immortal spirits who have forgotten their true nature. A system called auditing is used to help people remember. In auditing, people are able to re-experience painful events in their past, to understand them better.

There are many organizations that are linked to Scientology. For example, some help people stop using illegal drugs or to get back into society after they served a prison term.

Scientology says that psychiatry is bad, and should be abolished (not allowed to exist).

The Church of Scientology says that 13-15 million people are a part of the Church. Critics disagree with that figure, however. They say the organisation probably does not have more than 100,000 followers, mostly in the United States. They say that in 1960, there were probably 50,000 to 100,000 followers in the U.S. In the 1990s, a representative survey claimed there were only about 45,000 followers left. These figures seemed to have increased a bit, by 2004, where there were an estimated 55.000 followers.

The Church of Scientology

The Church of Scientology was started by the American writer and amateur philosopher L. Ron Hubbard in the year 1954. It is not as well known as Christianity or Islam, but it is newer. Scientologists believe their movement is growing. They claim it has thousands of churches, some of which are very small. The largest is in Clearwater, Florida.

L. Ron Hubbard wrote about the goals of Scientology, saying:

"A civilization without insanity, without criminals and without war, where the able can prosper and honest beings can have rights, and where man is free to rise to greater heights, are the aims of Scientology."

This means the goals of Scientology are to create a civilization where:

Scientologists say that the book Dianetics was the first self-help book ever written. It was written by L Ron Hubbard in the year 1950. Some key concepts in the book are:

Another basic teaching of Scientology is that understanding comes from three things together:

Hubbard called this the "ARC Triangle." Scientologists use this in their everyday lives. It is based upon the idea that making one of these three things better makes the other two better.

The tone scale is a way to rate an emotion as bad, better, or good. The scale goes from -40 ("Total Failure") to +40 ("Serenity of Being"). Positions on the tone scale started from the idea that one way of feeling is better than a worse way of feeling. But Hubbard described many other things that go along with emotion, such as health, survival potential, and ability to deal with truth. The tone scale is frequently used by Scientologists to understand people. According to Scientology, the lower the individual is on the tone scale, the more complex his problems are.

Many well-known people are followers of Scientology. They include:

All content from Kiddle encyclopedia articles (including the article images and facts) can be freely used under Attribution-ShareAlike license, unless stated otherwise. Cite this article:
Scientology Facts for Kids. Kiddle Encyclopedia.