John Joseph Travolta (born February 18, 1954) is an American actor, director, film producer, dancer and singer. Travolta first became known in the 1970s, after appearing on the television series Welcome Back, Kotter (1975–1979) and starring in the box office successes Saturday Night Fever (1977) and Grease (1978). His acting career declined through the 1980s, but enjoyed a resurgence in the 1990s with his role in Pulp Fiction (1994), and he has since starred in films such as Get Shorty, Broken Arrow, Face/Off, Swordfish, Be Cool, Wild Hogs, Hairspray and The Taking of Pelham 123.

In 2010, he received the IIFA Award for Outstanding Achievement in International Cinema. In 2016, Travolta received his first Primetime Emmy Award, as a producer of the first season of the anthology series American Crime Story, subtitled The People v. O. J. Simpson. He also received an additional Emmy nomination and a Golden Globe nomination for his portrayal of lawyer Robert Shapiro in the series. 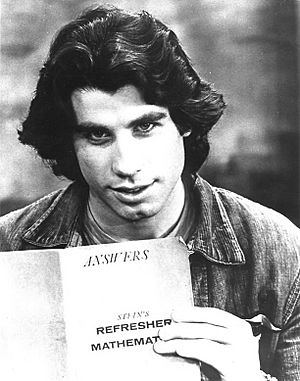 Travolta as Vinnie Barbarino in the ABC comedy Welcome Back Kotter, c. 1976

Travolta, the youngest of six children, was born and raised in Englewood, New Jersey, an inner-ring suburb of Bergen County, New Jersey. His father, Salvatore Travolta (November 1912 – May 1995), was a semi-professional American football player turned tire salesman and partner in a tire company. His mother, Helen Cecilia (née Burke; January 18, 1912 – December 1978), was an actress and singer who had appeared in The Sunshine Sisters, a radio vocal group, and acted and directed before becoming a high school drama and English teacher.

His siblings, Joey, Ellen, Ann, Margaret, and Sam Travolta, inspired by their mother's love of theatre and drama, have all acted. His father was a second-generation Italian American (with roots in Godrano, Sicily) and his mother was Irish American; he grew up in an Irish-American neighborhood and has said that his household was predominantly Irish in culture. He was raised Roman Catholic, but converted to Scientology in 1975. Travolta attended Dwight Morrow High School, but dropped out as a junior at age 17 in 1971. 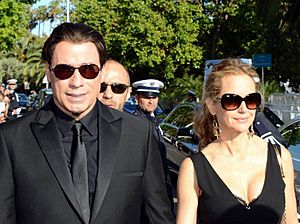 Travolta and wife Kelly Preston at the 2014 Cannes Film Festival

Travolta was in a relationship with actress Diana Hyland, whom he met while filming The Boy in the Plastic Bubble. He is now married to actress Kelly Preston in 1991, they have a home in Islesboro, Maine. The couple had a son, Jett, who in 2009 died at age 16 while on a Christmas vacation in the Bahamas. Their daughter, Ella Bleu, was born in 2000 and a third child, a son named Benjamin, was born in 2010 in Florida.

In memory of his son, Travolta created the Jett Travolta Foundation, a non-profit organization to help children with special needs. It has contributed to organizations such as the Oprah Winfrey Leadership Academy, The Institutes for the Achievement of Human Potential, and the Simon Wiesenthal Center

Travolta has been a practitioner of Scientology since 1975 when he was given the book Dianetics. After the 2010 Haiti earthquake, joining other celebrities in helping with the relief efforts, Travolta reportedly flew his Boeing 707 full of supplies, doctors, and Scientologist Volunteer Ministers into the disaster area.

All content from Kiddle encyclopedia articles (including the article images and facts) can be freely used under Attribution-ShareAlike license, unless stated otherwise. Cite this article:
John Travolta Facts for Kids. Kiddle Encyclopedia.