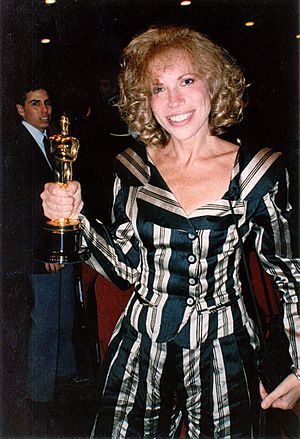 Carly Simon (born June 25, 1945) is an American singer-songwriter and occasional children's book author. She was born in New York City to businessman Richard L. Simon (1899-1960) and Andrea Heinemann Simon (1909-1994). She was raised in Riverdale, The Bronx. She has two sisters: singer Joanna Simon (born 1940) and composer Lucy Simon (born 1943). She also has a brother, photographer Peter Simon.

Simon's songs include: "You're So Vain", "Nobody Does It Better", "Coming Around Again" and "Let the River Run".

All content from Kiddle encyclopedia articles (including the article images and facts) can be freely used under Attribution-ShareAlike license, unless stated otherwise. Cite this article:
Carly Simon Facts for Kids. Kiddle Encyclopedia.